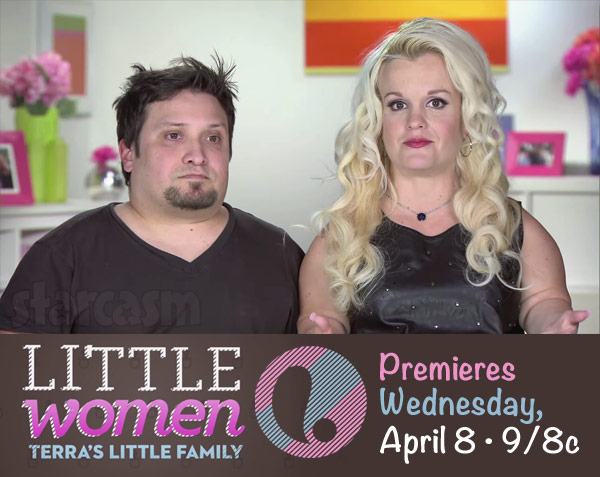 Lifetime continues to have BIG success with its Little Women: LA reality series, which wraps up its sophomore season next week still averaging well over a million viewers a week. Fans of the show won’t have to worry about getting their Little Women fix once the season is over, though, as Lifetime has just announced show star Terra Jolé will be getting her own spin-off called Little Women: Terra’s Little Family that will premiere April 8!

Here’s a teaser trailer for the show:

The new series will continue to follow Terra Jolé and Joe Gnoffo’s high-risk pregnancy story as it documents the impending birth of their baby. And in case you were wondering how Lifetime was able to premiere the series so soon, it’s because the show will be shot in “near real time,” much like True Tori.

Here is a little background bio on the star couple from Lifetime:

Both passionate performers, Terra and Joe met through a mutual acquaintance and have been together for seven years. Terra has toured with top celebrities including Miley Cyrus, recently released her own single “Booty Bee” and is currently working on her new album. Joe, a musician in Mini Kiss, is now playing drums in a Nirvana tribute band, Nirvanish.

The Terra Jolé spin-off comes just a couple of weeks after Lifetime announced it will be expanding the Little Women franchise into The Big Apple with Little Women: New York, which should premiere right around the same time as Little Women: Terra’s Little Family. (No official date has been announced.)

The M Word: Why the word “midget” is offensive to little people