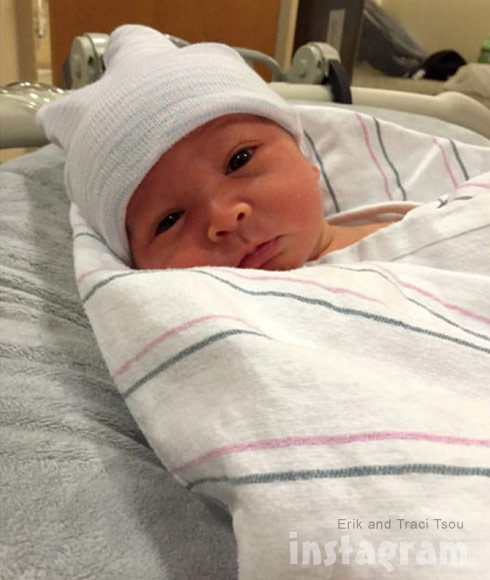 Little Women: LA star Traci Tsou has had a hard road on her journey to motherhood, suffering three miscarriages and being told by doctors that she would never be able to carry a baby to full term. After becoming pregnant again with husband Erik Tsou, Traci decided to step away from reality television to focus on her pregnancy, and the result is a healthy, average-sized baby boy!

According to People, Traci gave birth to not-so-little Jacob Christian Tien-U Tsou Sunday morning at 11:05 AM. Jacob weighed 8 pounds, 20 ounces and was 20 1⁄2 inches. However, Traci’s tweets after giving birth would suggest that Jacob was actually born on Thursday, November 12:

Thursday Nov 12 was the best day of our lives. Erik Tsou https://t.co/CQsmNzJSeG

Traci posted the photo of Jacob at the top of this post on Instagram earlier today and wrote, “Meet #JacobChristianTienUTsou, our new bundle of joy!!” She added a series of hashtags, including #nov122015, so I assume that is the correct birthday for Jacob.

And in case you were curious about the choice of Tien-U as a middle name, all the explanation you need is in Traci’s statement after giving birth. “It was a rough road, but we got our heaven’s blessing (tien-u),” Traci tells People.

We’d like to send out a HUGE congratulations to Traci and Erik on their big bundle of joy! I think Traci’s friend and Little Women: LA co-star Terra Jolé said it better in the caption to this Instagram photo:

As you all may know @traciharrisontsou is pregnant with @fu_corleone which means @penelopecharlevoix gets a "cousin" soon! Words can't express how excited we are anxiously waiting to finally see Penelope growing up around their baby. A baby that will most likely be a life long friend. Traci has honestly wanted a baby since I met her back in 2001. Babies were no where on my radar then, probably because I was 21 going on 16. Traci's now blessed with motherhood and we are so happy to share the joy of parenthood with both of them. Happy and overjoyed for their family to be.