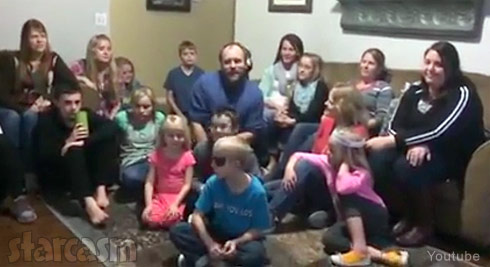 We have some disappointing news today for fans of TLC’s polygamist reality series My Five Wives as family patriarch Brady Williams confirms that the network has canceled the show after two seasons.

The announcement came from the Williams family via a Youtube video in which Brady thanks all of the show’s fans for their support over the first two seasons and adds that they will continue to document their lives with videos posted on their YouTube channel. Here is the clip followed by a transcript of Brady’s announcement:

Hi America! This is Brady and Wives and the whole Williams gang. We just wanted to send out thanks giving to all of our fans. You guys have been with us for the whole two seasons and we’re so appreciative of that.

It turns out that TLC, as great as they’ve been, has decided not to keep going with My Five Wives. So, being loyal back to you, we’ve decided that we’re going to keep our own YouTube channel going.

We’ll have weekly, maybe even biweekly updates. We’re going to have lots of crazy fun just like we always have. Lots of cute little Tailee quotes. Get your fill on Tailee. And we have a new little baby coming pretty soon! [In reference to Nonie being pregnant.]

So, stay tuned, and THANK YOU!

We’ve been covering the Williams family since before the first episode of the show and we’re saddened by the news that TLC has decided not to have a My Five Wives Season 3 — especially with the miraculous story of micro preemie baby Huck as yet untold on screen! We wish the Williams family well, and we will certainly be following their YouTube channel to continue getting updates.

MY 5 WIVES Brady and Nonie’s son Paul gets married