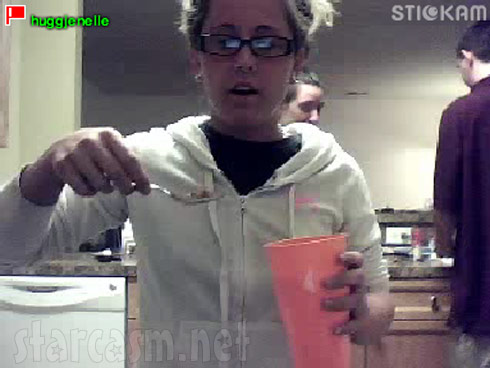 Teen Mom 2 star Jenelle Evans has had her issues with substance abuse in the past, but after passing numerous drug tests while on probation for the last 12 months, most assumed she had remained clean. But, as this video recorded on April 5 proves, Jenelle has continued her old ways by abusing a new substance: cinnamon!

That’s right, Jenelle and her pals Allison and Nick all took the infamous “cinnamon challenge” in which you attempt to swallow an entire tablespoon full of cinnamon. The challenge has spawned an internet meme with everyone from little kids to grandmas trying their best to hold down a mouthful of the spice. It can be very dangerous, and can cause respiratory illness including pneumonia and/or a collapsed lung. The challenge is impossible because the cinnamon particles don’t dissolve into water (including all the moisture in your mouth, esophagus, and nose.) Those particles can get into your lungs, and cause major damage.

Despite the dangers, Jenelle announced to her Twitter followers she would be taking the cinnamon challenge live on the video site stickam, and right at 12:30am she followed through.

I should warn you that Jenelle’s friend Allison is both foul mouthed and defensive, which leads to a lot of profanity when she’s reading some of the negative comments from those watching the video.

(Video may take a moment to load)

LOL! Jenelle was doing pretty well until she tried to talk, at which point you can see a puffy reddish cloud of cinnamon dust coming out of her mouth and she loses it. She then spends some quality time at the sink before describing the experience to viewers.

Allison was an instant FAIL with her attempt. Jenelle then offered up her expert critique of er friend’s technique saying, “I think she swallowed it too fast.”

Nick, on the other hand, completed the challenge no problem! His secret to success? “I let mine sit there and dissolve.”

In case you hadn’t heard, Jenelle is now officially off probation for the first time since 2010! She was in court yesterday where it was determined she had completed her probationary period. Her attorney Dustin Sullivan issued this statement:

“Jenelle has in fact been released from probation after successfully completing all of the requirements the Judge had previously ordered. It is obviously a very exciting day for Jenelle since there has been some sort of condition placed on her since October 2010. I am very happy with Jenelle and the progress she has made over the course of the last 18 months. She has proven to take her responsibilities serious, and I believe this will forever be a turning point in Jenelle’s life.”

Congrats to Jenelle! Let’s hope she’s able to stay on the straight and narrow!

*** It should be noted that there are numerous articles detailing the health risks of taking the cinnamon challenge, so it is not recommended that you try this at home!