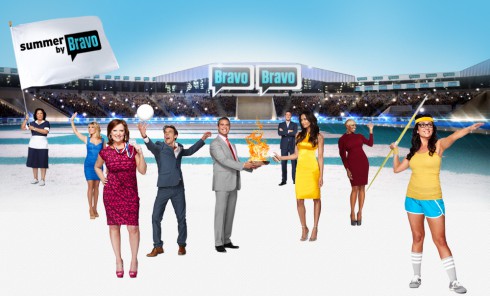 Is there a bigger Bravo fan on the planet than Bravo itself? Perhaps it’s all just trickle down fanonomics from their Bravoddicted figurehead Andy Cohen, but either way their summer marketing campaigns have become one of the most joyful and hilarious marketing campaigns in the industry, and the summer of 2012 is no exception!

Today the official Summer by Bravo commercial hit the internet as Bravolebrities from around the dramasphere gathered together to compete in the Bravolympics! Padma Lakshmi lights a flambe entre torch that Andy holds high to kick off the Bravolympiad and then we are treated to such athletic endeavors as NeNe Leakes, Kyle Richards and Ramona Singer competing in a cocktail sprint, Madison Hildebrand getting oiled up in a Speedo for a high dive, discus thrower in a cocktail dress Sonja Morgan tossing a discus plate to an awaiting Tom Colicchio, and starcasm fave Jenni Pulos steals the show as a jubilant jiggly javelin tossing nerd. 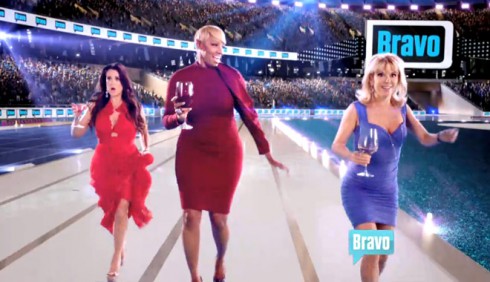 Meanwhile, the stands are packed with the rest of your Bravo favorites cheering their Bravompatriots [off – OK, that one was a bit much] on as the fist-pumping-inducing beat of Madonna’s “Superstar” plays loudly!

Here are some behind-the-scenes video clips from the shooting of the 2012 Summer by Bravo commercial as the network (and fans) get ready for more drama and fun! (Be sure to check out all the shows coming up on Bravo with brief descriptions by clicking here!)

MADISON GETS OILED UP

Madison Hildebrand (Million Dollar Listing) is in a Speedo, oiled up, and gets wet. Nothing more to add.

JEFF PISSED A FEW OFF AT BRAVO

Jeff Lewis explains that he must have pissed a few people off at Bravo. See why.

Is NeNe Leakes getting her own talk show?