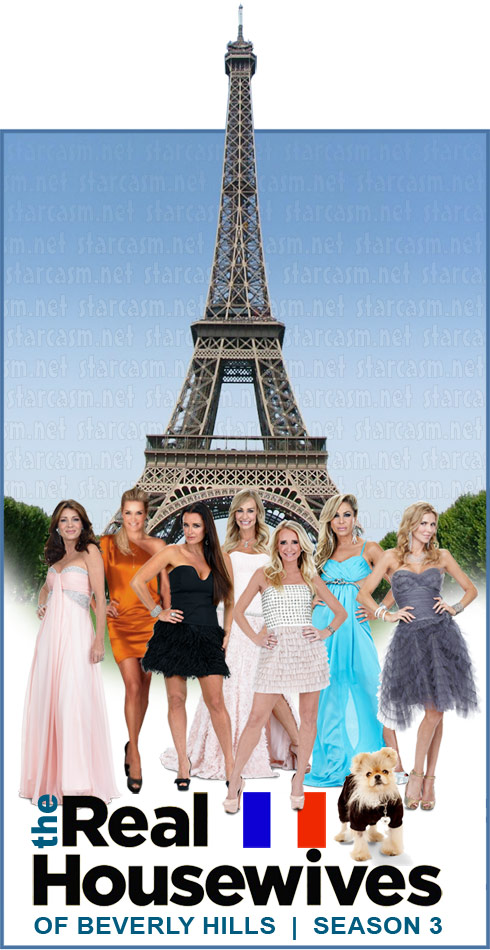 In what has become a staple in all of Bravo’s housewives franchises, The Real Housewives of Beverly Hills are loading up on a plane for an extended vacation together. Nope, it’s not swamp boating in Florida, and sadly it’s not a trip to their own version of Scary Island – the BH ladies are headed to the City of Light, Paris! Well, at least some of them are.

Radar Online reports “Lisa Vanderpump, Brandi Glanville, Kyle Richards and Yolanda Hadid are all Europe bound, with Taylor Armstrong still on the fence when it comes to joining the ladies or not.” A source tells the site, “Taylor is still trying to decide whether or not she wants to go.” The source then piques my curiosity by stating, “Taylor is just acting very sneaky and secretive recently. It’s almost as if she is trying to create some mystery around her.”

So what about the other gals not listed on the France trip manifest? “Adrienne Maloof decided not to go because the other girls keep ganging up on her, and it just got to the point of being utterly ridiculous. Kim Richards most likely won’t go even though the other ladies want her to, because she just wants to spend time with her kids. Kim doesn’t feel quite strong enough yet to go overseas and wants to put her sobriety first.”

UPDATE – It appears Kim Richards decided to go after all! She was photographed along with Yolanda, Brandi, Kyle and Mauricio (How did the hot hubby score a ticket?!?) at the airport in Los Angeles just before parting for Paris.

To be honest, I’m not a huge fan of these overseas trips. (I’m still wincing from that RHONY Sex In the City 2 recreation abomination) They usually seem forced and a little too artificial for me, as if they’re told to try to stir up stuff (more so than usual) while they’re there. Plus, you always wind up with a couple staying behind having really boring lunches talking about what the other ladies are probably doing, etc, etc, etc…

But, something I do like about these trips? Creating silly images! Look at them ladies (and Giggy!) hanging out in front of the Eiffel Tower! Je l’aime!