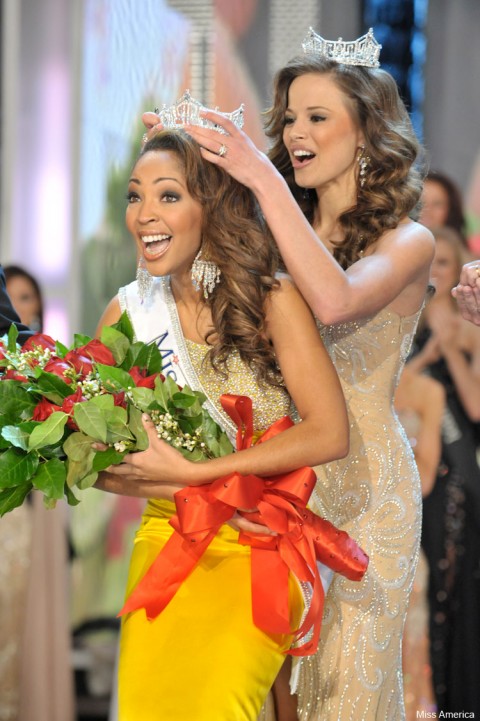 Everyone’s eyes were focused on the interview portion of the competition this year, after last year’s controversial gay marriage question from judge Perez Hilton launched Carrie PreJean into the national spotlight. In response to being asked what could be done about this country’s problem with childhood obesity, Caressa responded immediately and emphatically, “Take away the TV, take away the video games, set some standards for our children!” She went on to say that we should encourage our kids to go outside, “playing imaginary games with sticks in the street like I did when I was little.” The answer may not be all that revelatory, but it managed to not be offensive and Caressa’s confidence stood out among the other finalists, who answered their questions a bit haltingly.

But don’t think for a second Caressa wasn’t prepared for the PreJean trap! During the finals of the Miss Virginia pageant she was posed with a question about California’s Proposition 8. According to the Richmond Times Dispatch:

She told the pageant audience that separation of church and state should take precedence over her personal beliefs. She said she believes marriage should be between a man and woman “because of my religious background, but I don’t believe we should legislate against gay marriage. One doesn’t de-solidify the other.”

Reflecting on her answer last week, Cameron said, “It wasn’t offensive to anyone, thank God, and it all worked out.”

Well-played Caressa! But enough of all that controversial interview hooey, let’s see what the beautiful Caressa Cameron looks like in a swimsuit! Here she is modeling a sexy black bikini during the swimwear portion of Miss America:

If still images aren’t enough, here’s a video of the swimsuit portion of the show featuring Caressa. (She owns the stage at the 3:45 mark)

Congratulations to Caressa Cameron – let’s hope she doesn’t have lots of topless modeling photos and cell phone sex tapes hiding in her closet! (Actually, as a gossip blogger I suppose I kinda hope there are a few around.)

Caressa doesn’t seem to have an online presence on any of the social media sites, although there is a defunct myspace account under her name with this profile photo: 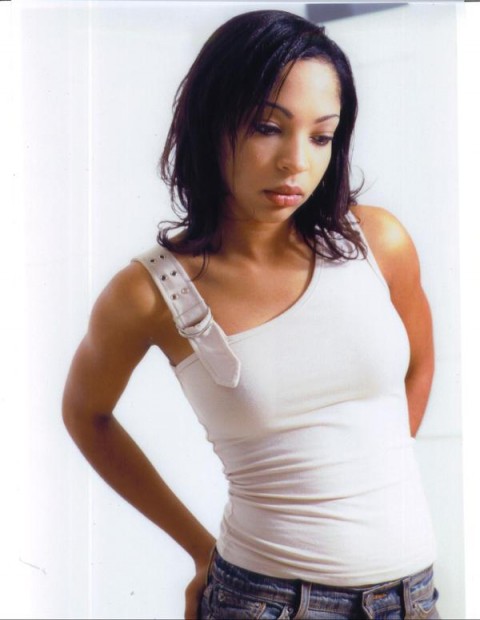 Caressa has her own web site, that I’m guessing will be given an overhaul soon. Just in case it does, here is the home page introduction she gives herself:

Soulful. Energetic. Young. Sultry. Caressa Cameron is to music what light is to the sun. To compare her to anyone would be a mistake, but her fiery style puts one in the mind of D’Angelo or Maxwell

Born in Washington DC, this singer/actress, has appeared before countless audiences including the National Baptist Association, Women’s Business Association, the annual Black Arts Festival and the famed Apollo Theater audience.

The reigning Miss Charlottesville and Miss Fredericksburg Fair, Caressa, has modeled for Macy’s, Nordstrom and a variety of other specialty stores. Caressa’s theater experience includes her stellar portrayal of Eponine in Andrew Lloyd Webber’s Les Miserables, mostly recently Caressa has appeared in a WE (Women Entertainment) real life documentary. Which featured the behind the scene world of pageantry. The was also a quest on Comcast CN8 morning show and she can be seen in the upcoming film, Syriana, starring George Clooney.

With a mix of beauty, outrageous vocal abilities and a simple schoolgirl charm, Caressa ‘s inner spirit is a lighthouse on the shore. Sweet. Sassy. Sexy. Searing. She journeys through a spiritual evolution that will turn you inside out and open a portal to a parallel universe where music is the first law of communication. Inimitable. Illuminating. Intense. She sweeps you up in a force of nature that both captures and captivates.

Caressa Cameron’s voice is destined to take you higher and she’s already spreading her wings in preparation for meeting you there. To obtain a copy of her demo, Got Love, contact Meredith Management @ mereman17@yahoo.com.

Good gracious! Another photo break and then I’ll share her resume from the site.

Objective
To pursue and obtain a career in an area that will showcase my talents, training, gifts and abilities. Experience

Here are the Top Five at the 2010 Miss America Pageant (In random order) followed by the contestants in the Top 7, 10 and 12: