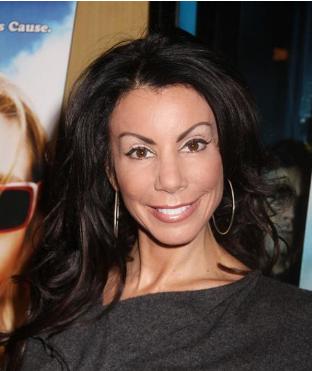 Apparently Danielle Staub picked up a new set of shiny virginity with her new face! The 47-year-old infamous Real Housewives of New Jersey star has had a colorful life full of carnal pleasure, some of it documented on the first Season of RHNJ, and more of it detailed in a book by her ex-husband, but it’s never too late to swear off sex until marriage.

She’s been married twice before, but this third time she’s going to try things a bit differently. Danielle tells PEOPLE she’s going all the way with this new resolution, forbidding even thinking about sex until her next wedding night. Getting married is definitely in her plans, but she’s going to wait for the right man to find her instead of staking out a beau for herself. She’s also not concerned about the inevitability of her wedded bliss, she told PEOPLE: “It’s going to happen. Have you seen me?”

The multitasking vixen says she hasn’t been intimate with a man for a year and a half, since the first season of Housewives filmed. During that time she was on the prowl for a husband too, but she was a little more desperate, telling the camera that she needed a husband to take care of her and her girls because they were running out of money. Now she’s making her own cash, so she doesn’t need a husband anymore, she just wants one.

So how did Danielle become self-sufficient enough to take care of her own? The second season of RHNJ reportedly paid $30,000 per episode (the first Season paid zilch.) She’s also been doing interviews and showing up for events, which most definitely command a few fees, and she’s finished writing a memoir to refute Cop Without A Badge, title The Naked Truth. On top of all that, in the works are a fitness and nutrition video and a line of fitness clothing.

Teresa Giudice crisis so bad her crisis manager quits, puts her on blast