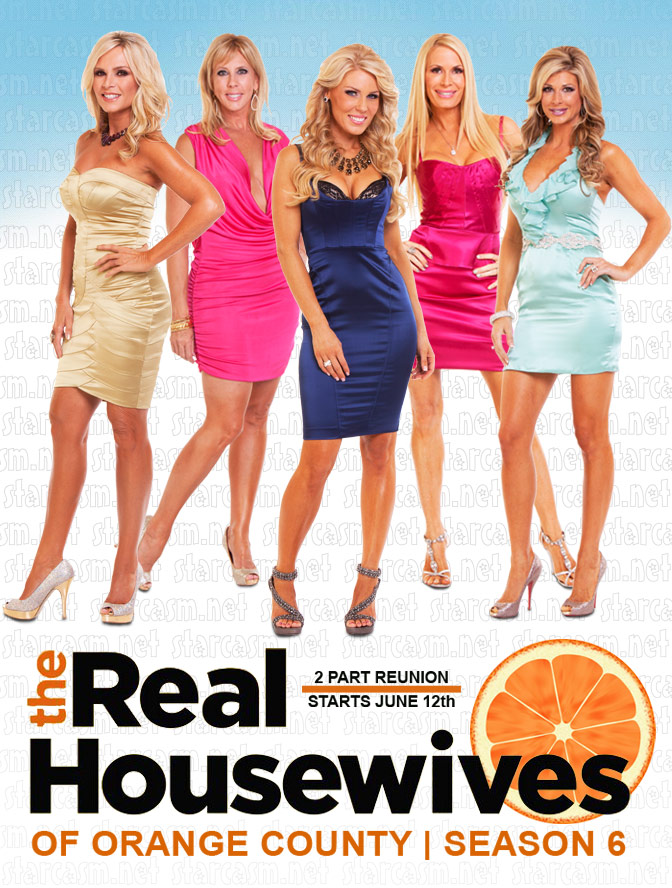 Season 6 of The Real Housewives of Orange County had more cat fights than a New York City alley way! Usually these shows tend to naturally divide into two teams during the season (Team Bethenny vs. Team Jill for example) but this season of RHOC had enough teams to create a March Madness bracket! The result was a drama-filled melee of vitriol and front-stabbing that was as unpleasant as it was mesmerizing.

So, needless to say, the Season 6 reunion special promises to be one of the best ever! As a matter of fact, that’s exactly what Andy Cohen tweeted just after they finished filming it on May 18:

JUST wrapped the OC Reunion. I think it was our best OC reunion in 6 seasons. Really dramatic, tense, powerful, and emotional.

Enough hype, let’s get to the preview clip!

In case you’re at work or your device won’t play the video, here are some of the highlights:

Peggy Tanous brings up the fact that she and Alexis’ husband Jim Bellino used to date by saying, “When I first met Alexis I went up to Jim and I said, ‘Does Alexis know that we hung out?’ and he goes, ‘NO! And she never will!'” To which Alexis replied, “She’s lying.”

Donn Gunvalson was apparently interviewed for the reunion (a-la Cedric from Beverly Hills) and he is shown talking about his on-camera split from wife Vicki, saying “I don’t think the way this went down was treated with class or dignity.”

Andy points out what most people have been saying about Gretchen’s actions this season claiming that she has taken a lot of crap from Vicki and Tamra over the years and “you were going to dish it out this season.”

That’s followed by what appears to be a HUGE assault on Slade by Tamra, and as usual, Tamra pulls no punches! But, Slade gets his turn on the couch and unleashes (whoops – leash reference!) on Tamra with trashy gusto by declaring, “I know you’re busy sucking off everyone else, right?” This causes Tamra to get up and leave while proclaiming, “I’m done. Piece of sh!t. You’re the lowest form of sh!t there is in the world.”

OC alum Jeanna Keough apparently gets another turn on the reunion couch where she addresses her feud with Tamra Barney by tearfully saying, “It’s hard to be around someone that can look you in the eye and say you’re lying.” Tamra’s reply? “You ARE lying!”

And as you might expect, all the sleeping dogs were awoken by all the cat fighting, including Tamra’s accusations against Gretchen that she was cheating on her wealthy and terminally ill fiancee Jeff Beitzel with Jay Photoglou (You can catch up on those accusations in our Season 4 Reunion comic book!): “You were sleeping with another guy while your fiancee was dying!

Though I’m not sure of the context, my favorite quote from the clip is from Tamra (as you might expect), who incorporates her favorite scatological four-letter word in this t-shirt worthy catch phrase: “Is your ass jealous of the sh!t that comes out of your mouth?!?”