(If you click on the photo above and zoom in — no, not there! On her name tag — you’ll notice it has both of her identities listed.)

Here’s Amber explaining a little bit about her split personality, which is pretty much summed up when she says, “Sexy Kitty brings the party.”

UPDATE – Click here to see Amber’s Sexy Kitty’s mug shot photos from over the last few years, including a couple for public intoxication. “I’ve woken up in jail. Thanks a lot Kitty!”

But don’t think Amber doesn’t know how to keep Sexy Kitty in check — at least enough to keep her job. She’s been working at Redneck Heaven since the first day it opened more than three years ago and she “considers the restaurant to be her second home,” according to her MTV bio. “Amber can be a handful at times, but when it comes down to it she is an extremely loyal friend who would do anything for any one of her redneck girls,” the bio concludes.

As you might imagine, having worked at Redneck Heaven for more than three years and with the “breastaurant” having a different risque theme for their employees seemingly every night, there are about a million different photos of Amber dressed down for such events as “Naughty School Girls,” “Wash Me Wednesday” and “Sexy Santa’s Helpers” — here’s an example of the latter in which Amber and her gal pals would obviously qualify for the “naughty” list:

Now that’s what I call “Dancer, Prancer and Vixen!” (That joke won out over making a North Pole reference, “ho ho ho” and St. Nicktoria’s Secret.)

And here are side-by-side shots of two of Amber’s good sides:

If you’re curious about Amber’s tattoos, the one on her right sight reads “In time this too shall pass” and the one under her, ummm, heart reads, “Forever.” I’m not sure what the one on her left side says, but when figure it out I’ll come back and update the post.

In addition to the two good sides above, there’s also her other good side, featuring what I officially dub the Amberdonkadonk:

That photo makes me think back to the very first Big Tips Texas promo that ends with Amber walking to the pool skillfully carrying multiple drinks and wearing a tiny black two-piece as she says with a serious Southern drawl, “Well butta my ass and call me a biscuit!” Something tells me that’s going to be a themed event at Redneck Heaven before too long. Someone should let the head of marketing (and Amber’s bestie) Typhani know!

OK, OK, enough photos of Amber in skimpy lingerie and teeny tiny bikinis (i.e. her Redneck Heaven uniforms), here’s Amber’s official MTV promotional photo in which she “covers up” and goes formal with a mini-skirt and spaghetti strap tank: 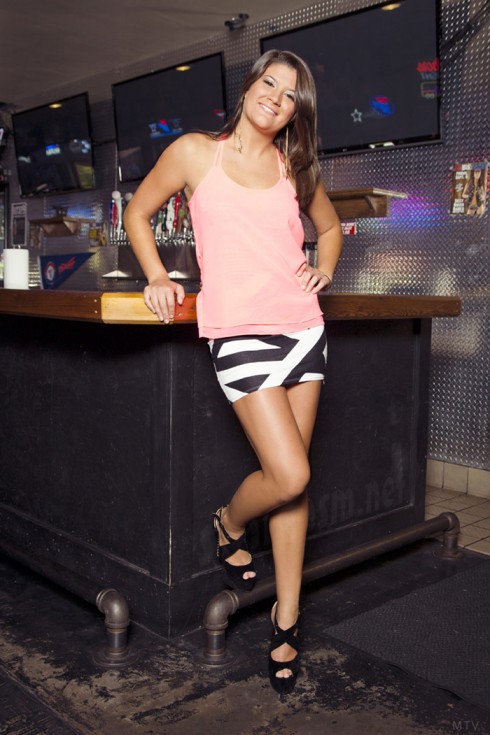 I’ll start wrapping this post up with a few random photos of Amber (or perhaps Sexy Kitty) and her co-workers from some of the various themed Redneck Heaven events including “Naughty Maids” and “Bayou Babes:”

I’m guessing Big Tips Texas is going to have its fair share of pre-premiere (and post-premiere) detractors, but I’m looking forward to seeing if these ten ladies can work some of that Jersey Shore magic and wind up with a show that is addictive, fun and entertaining with the Texas equivalent of meatballs — maybe “biscuits?” And no doubt Amber looks to be the Queen Biscuit! Or I guess the “QB” of Redneck Heaven might be another way to put it. 😉

Big Tips Texas premiere October 9 at 10/9c on MTV with back-to-back half-hour episodes. We plan on being there live-tweeting so if you’re tuned in and have a Twitter account be sure to “tweet our ass and call us a biscuit” @starcasm!

And if you want to keep up with Amber, here are her social media links: