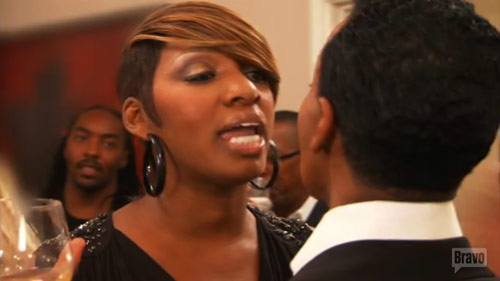 The beetchy peaches of the Real Housewives of Atlanta are set to return on October 4 and Bravo is already dishing out some tasty appetizers!

In this preview clip we see that the beautifully Platonic relationship between NeNe Leakes and Dwight (The South’s gay black Tim Gunn) is on the rocks seemingly because of things Dwight has said about the ‘wives:

Radar Online has a source that was present for the April confrontation at the Lowes Hotel, and apparently Kim Zolciak was fuming mad at Dwight as well.

“NeNe and Kim came storming into the hotel and got straight in Dwight’s face, accusing him of spreading lies about them and making up rumors.

It was absolutely crazy! NeNe and Kim were both screaming at him, and he gave back as good as he got. Dwight started yelling at NeNe that she was nothing but a common prostitute and that she had hooked up with a married man, and he totally trash talked Kim too.”

Thus provoked, Nene and Kim auditioned to be the next Teresa Giudice (pre-financial meltdown) by throwing furniture at him. Nene attacked Dwight with a chair, and Kim threw a vase at him.

This doesn’t bode well at all! Dwight is the third most entertaining housewife on this show behind NeNe and Kim and without his relationship with NeNe they’ll probably have to cut him out entirely! What will Andy Cohen do on Watch What Happens Live?!? Will the “Dwight or Dwong” segment disappear entirely? Nooooooooooo!!! Forget saving Nene’s marriage to Gregg, we need to save her marriage to Dwight! We live in an advanced culture, don’t we have gay man/diva counseling centers?

But don’t think for second that the Dwight fight is the only HUGE drama on this season of the ATL! Here’s a montage preview clip for the entire season featuring spats between Kim Zolciak and newbie Phaedra Parks about Big Papa and Phaedra’s convict husband Apollo Nida, NeNe and Kim seemingly having yet another friendship-ending fallout, Nene’s breakup with husband Gregg and a live performance of “Don’t Be Tardy For The Party” that looks too good to be true!