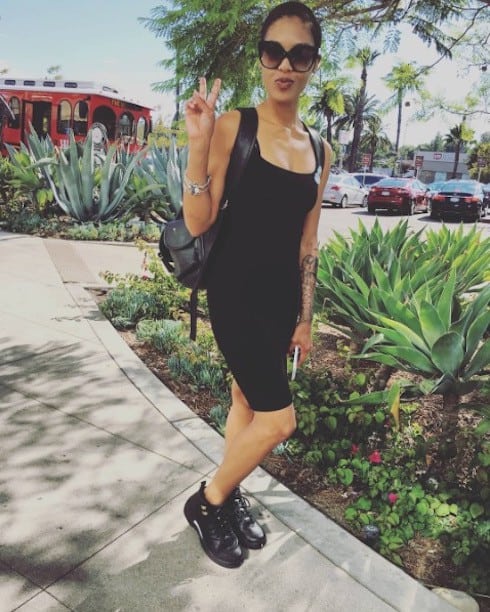 The Love & Hip Hop Hollywood sex tape drama continues to heat up–and, this time, it’s Moniece Slaughter and Lil Fizz who have a heart-to-heart about the video’s pending leak. Moniece’s baby mama is all sympathy, particularly when the two discuss the tape’s potential affect on their young son Kam. The tape came into play late in LHHH Season 3, and only surfaced at all when Princess decided she needed to take action against Moniece following Moniece’s ongoing humiliation of Brandi. Fortunately for Princess–and very unfortunately for Moniece–associate Jason Lee had access to the footage, and promised to provide it following Brandi’s self-humiliation–he made her bark like a dog in public–as payback for the drink she threw in his face last season. (The soap opera never stops unfolding!)

Though Moniece hasn’t denied that the tape is real, she has come back hard after Jason, claiming on social media that her legal team has advised her to refrain from making public comments about the tape. Moniece has also implied that she intends to come after Jason in the courtroom; he, unsurprisingly, remained unfazed, instead telling Moniece “You’d think your vagina had a ‘donate .50 cents a day’ sign next to it” and “Saddest part of this whole saga is that you’re truly a medically disturbed person that does anything for attention.” (Click here for Jason’s full, shade-filled statement.)

Now, thanks to a just-released clip from VH1, we know how Moniece Slaughter and Lil Fizz plan to deal with the situation:

“When it comes to this, Fizz responds, “it affects Kam. And that’s when I have to step in. I’m gonna go holla at [Jason.] I know you’re upset, blood probably boiling….[But] as of right now, nobody has anything other than Jason.”

Who is Ray J’s girlfriend Princess?