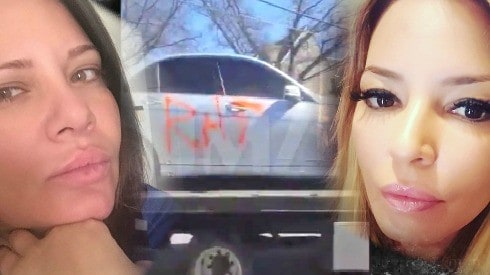 It looks like there may be more drama brewing between Mob Wives stars Karen Garvano and Drita D’Avanzo. TMZ reported that Karen’s car, a Mercedes Benz, recently had its tires slashed and the word “RAT” spray painted down the side.

The car was towed away, but you can clearly see the vandalism in the video clip below.

While we don’t know who is to blame, Karen has no qualms about pointing fingers.

“I believe it has to do with the beef starting from Mob Wives about a year and a half ago which had to do with Drita and her husband Lee,” Karen explained.

“Actually, I seen Lee the other day in a diner and then I had seen him circling around my house and then, all the sudden, my car gets mysteriously vandalized,” Karen continued. “And I heard through a couple of people that it was him.”

Drita took to social media to put Karen on blast for her allegations:

Can u believe this sh&t?! First of all I truly feel sorry for this thirsty ass delusional lonely old woman. It’s funny how I recently posted about being back in your TV screens..created/exec producing my show and this just so happens to happen? I wouldn’t be surprised if this has-been did this to her own car to be back in the spotlight & once again..using my name to do so. I’m a mom..running a business @ladybossbydrita & don’t have time for this nonsense. Sad…I’m focused on moving in a positive direction..but negative people still trying to bring me down. This “BULL” S–t Artist needs to get a job instead of running out the ocean thinking she’s Gisele Bundchen. I WOULD NOT WASTE MY TIME ON that #Shamu #mobSlob or a good can of paint for that matter. ” Vandalism is not my style…punching lying dumb bitches in the face is”. Keep it moving girl..and let me live lol

Of course, this isn’t the first time Karen and Drita have gone toe to toe. During the Mob Wives finale last year, the two engaged in a nasty twitter battle after their blowout fight aired.

Since the show ended, both ladies say they have moved on to bigger and better things.

Last fall, Drita talked about her upcoming projects and how happy she was the series ended. Karen echo Drita’s sentiments by saying the Mob Wives drama is “in the past” and she’s “working on the future.”