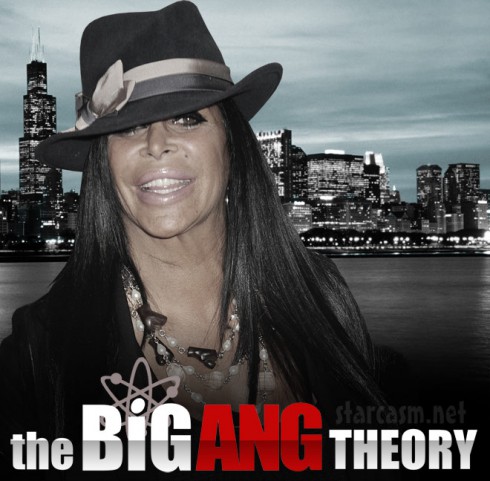 Angela “Big Ang” Raiola was the breakout star of the second season of VH1’s Mob Wives. Actually, it was more than that – this personable, husky-voiced 52-year-old with an affinity for plastic surgery would better be described as a reality supernova! And now, much like a freshman basketball player at Kentucky, Big Ang is moving on to the big leagues – with her own reality show!

Mob Wives creator Jennifer Graziano confirms the move to Hollywood Life, telling the site in an interview video, “It will start shooting in a few weeks to air in July.”

Graziano was well aware of Big Ang’s metaphoric (and literal) heavenly body early on. “When I first brought Big Ang in, I wanted her for season one, but I felt like she was a little bit older than the other women,” she says. “She’s a friend of my older sister and my aunt. … We’ve known her since we were kids. We had that one major connection, and I thought, ‘Let me build my brand first, then save her as my secret weapon for season two,’ which I think worked out great.”

“Everybody loves Big Ang,” she continues. “She’s just so hysterically funny, so genuine, so real — it’s almost like you can’t believe what you’re seeing! This woman is so special and so crazy, and I knew that when I brought her on for season two.”

Graziano refers to the show as “The Big Ang Show,” but I’m not sure if that’s what it will actually be called or if that’s just a working title. I personally like The Big Ang Theory. Another starcasm writer suggested Goodpillows. And of course, Godmother is always an option. Either way, I think Angela should be able to bring the Mob Wives theme song with her – they only need to rerecord it and drop the second “B” from “Big Bang.”

I know I’ll be tuning in! I only hope they fly Big Ang down to Miami for a few episodes so they can do a little crossover with The Real Housewives of Miami‘s Mama Elsa!