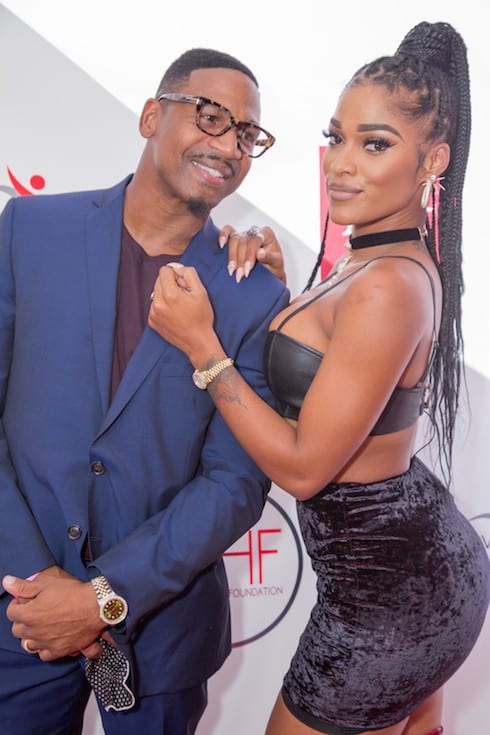 Stevie J new baby rumors reached a fever pitch last week, thanks to Love & Hip Hop Atlanta star Joseline Hernandez sharing a series of what looked like baby bump photos on social media. Joseline topped her string of updates off with an image of an ultrasound, allegedly hers, and seemingly directed at her (many) detractors–but, when she deleted the ultrasound photo, LHHATL viewers began to question her motives. And, apparently, so did former partner Stevie J, who’s gotten a restraining order against Joseline!

Of course, Stevie J and Joseline have something of a tortured history these last few months. The pair have been sniping at each other on social media and in prominent interviews since well before the fifth season of Love & Hip Hop Atlanta began airing in the spring. In fact, Stevie and Joseline have been separated for months, but their feud took a nasty and downright ugly turn last week, when Joseline claimed Stevie had been molesting Eva, the daughter he had with Mimi Faust, for years. Mimi quickly came to Stevie’s aid, stating that the allegations were baseless and awful, and Joseline has since backed off of them.

Now, it looks like Stevie’s decided to go a step further, and get legal on Joseline. According to a new report from TMZ, Stevie has been granted a restraining order against Joseline, to whom he was never actually married. His request calls Joseline “volatile” and “jealous,” and further says that she is “filled with an evil sense of revenge.” Now, she has to stay 200 yards away from him at all times, or risk arrest. (The report does mention that Joseline can come by Stevie’s house to pick up her “Rolex and diamond ring,” as long as she is escorted by police officers.)