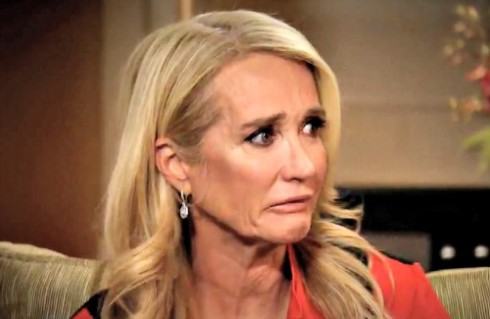 Following her arrest on charges related to public intoxication last week, Real Housewives of Beverly Hills‘ Kim Richards sat down with Dr. Phil and her kids to talk about her situation. Although she initially seemed remorseful, the conversation went south when Kim suspected it was an attempted intervention.

“Is this an intervention? I’m sorry, I can’t,” Kim said in a new promo for the interview, which airs on Tuesday.

She then stormed out while “yelling and cursing,” an insider told E! News.

“You could tell she felt cornered and hadn’t realized what she had signed up for. She got up, and left in a huff yelling and cursing,” the source said. “Anyone who was around her at the time could hear her shouting obscenities as she made her way out.”

Before she left, Kim said she knew she made a mistake as soon as she poured herself a drink last week. Previous sources said she was torn up about having to relive the RHOBH reunion and the drama with her sister, Kyle Richards.

Dr. Phil put on his tough face to ask Kim whether she’s been “living a lie” by claiming to be sober for the past three years. He added, “You are drunk in a bar fighting with a cop. That is not good mothering!”

The production source said Kim approached the interview with an open mind, but felt attacked — especially once her kids joined the conversation.

“[She was] genuinely wanting to do the interview but once she got there she became very upset and frustrated. Her frustration grew because she began to realize what she was in for,” the insider said. “Her kids were starting to talk like it was an intervention and Kim couldn’t handle it.”

Another source told Radar Online that Dr. Phil did offer to pay for rehab for Kim, but she declined at the time because she doesn’t want to miss her daughter’s upcoming wedding. If she decides to seek treatment, the source said Dr. Phil’s offer is her only option.

“Not only is Kim broke, but she also doesn’t have health insurance and has no way to pay for rehab,” the insider said. “She had been using that as a reason to not go back for treatment, as no one in the family was stepping up to foot the bill.”

It’s unclear whether Dr. Phil’s offer is still on the table.

The full interview airs on Tuesday’s episode of Dr. Phil.