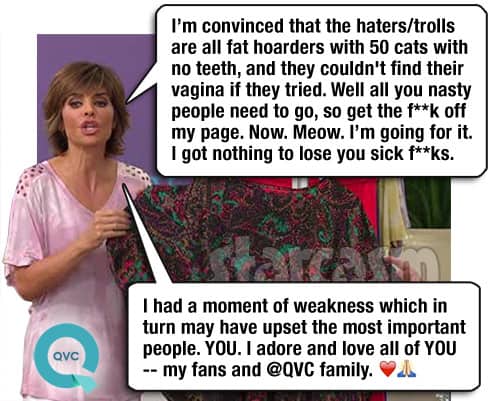 Lisa Rinna had a pretty bad season on The Real Housewives of Beverly Hills, and, back in April she let her frustration at the backlash of negativity from fans get the best of her, as she posted numerous foul-mouthed and filthy comments on Instagram. Lisa quickly deleted the comments, but not before they were archived forever on the internet, where they did little to quell the fan uprising against her.

Here are some samples of hat she wrote, thanks to All About The Tea:

I’m convinced that the haters/trolls are all fat hoarders with 50 cats.

With no teeth, and they couldn’t find their vagina if they tried.

Well all you nasty people need to go.

I’m going for it. I got nothing to lose you sick f**ks.

Lisa appeared on Watch What Happens Live earlier this month and the topic of the Instagram comments came up. Lisa referred to them as her “little rant” after pointing out that it’s her Instagram account and “I can say whatever I want.” She concluded her reaction with a “double snap.” Here’s her full reaction from WWHL:

I had a moment, which again you know every once and a while you do snap. And I tell everyone, “Don’t do that,” and then I do it. But it was to the haters and trolls only. I addressed it, not to anyone in particular. It was not for a Real Housewife of Beverly Hills fan, who I love and adore. It was to haters and trolls. And if you’re going to come on my Instagram, I can say whatever I want. And I did have myself a little rant. Yes I did. Double snap.

It seems the negative feelings didn’t go away just because an unapologetic Lisa Rinna clarified to whom her comments were addressed–and that probably was not a good thing, given that she was scheduled to return to QVC on Sunday to promote their “Lisa Rinna Collection” fashion line.

So, five weeks after making her initial comments, Lisa issued an actual apology. Attached to a photo with the word “grateful” and a heart, she shared these words on her social media accounts on Friday: 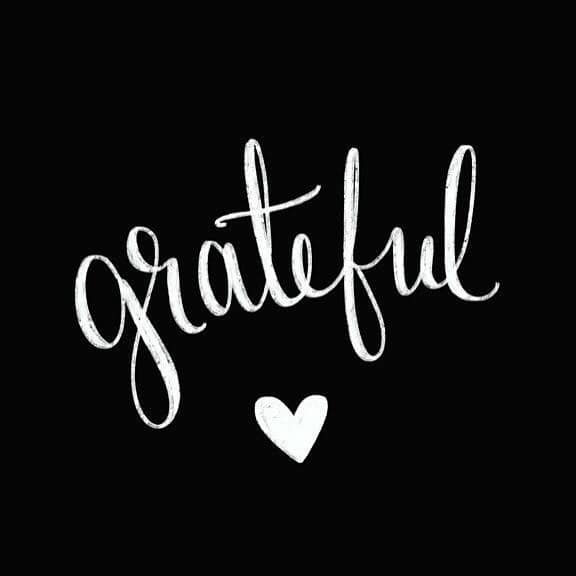 Last month, as RHOBH was wrapping up, my social media platforms were flooded with intense, unkind messages. As a rule, I prefer to focus only on the wonderful, amazing fans out there because they bring such incredible light with everything they do and say. Unfortunately, the consistent negativity that appeared on my Twitter, Instagram and Facebook day after day, seeped in and to my disappointment, got the better of me. I used ugly, derogatory words in the comment section of my Instagram account to try and stop the people who were constantly lashing out at me. That’s not okay.

Not for one second was my intent to hurt, belittle or degrade my beautiful fans. Those words were never intended for 99.9% of you out there. In that moment, I felt beaten down and allowed myself to be hurt by the .1% and I held up a mirror and lashed out at them…. Not the rest of you. Please take this as my sincere and heartfelt apology to anyone that feels slighted, hurt or disappointed by my comments directed to a very specific group of Internet trolls. I know better than to feed them with their own vitriol and I had a moment of weakness which in turn may have upset the most important people. YOU. I adore and love all of YOU — my fans and @QVC family. ❤️??

So whatya think? Are you ready to buy some Lisa Rinna clothes on QVC now, or not?