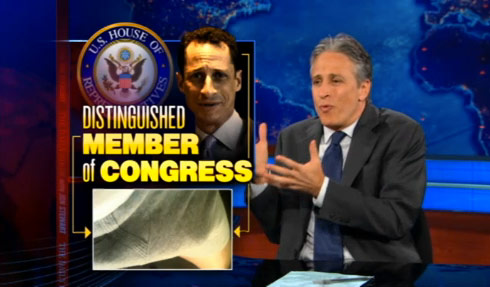 Jon Stewart used to visit Anthony Weiner at his house near the beach in Delaware when they were young college-aged whippersnappers, and as everyone knows Jon’s political views tend to align with the Democratic Party, so many thought he wouldn’t touch the Weiner Gate story with a (ahem!) ten foot pole. But, as Jon explains at length in this clip, a story about a picture of a man’s penis, Twitter and a dude with a name synonymous with penis HAS to be addressed! And that address is The Daily Show‘s wheelhouse!

“The only thing that Anthony Weiner and this gentleman appear to have in common is that they both lean hard to the extreme left, BOOM! BOOM!”

Inc ase you weren’t up to date on the scrotograph scandal, Anthony Weiner has Clinton speaked a non-confession and now admits there’s a possibility the photo isn’t not his – or something like that. From The New York Post:

“You know, I can’t say with certitude,” he insisted when a skeptical-sounding MSNBC reporter asked, “That’s not a picture of you?”

He later grudgingly admitted to The Post that snapshots of his nether regions could exist.

“There are photographs of me in the world, yes,” he said, when asked point-blank if he’d ever taken sexually charged snapshots.

Oh, and be sure not to miss out on our coverage of Ginger Lee, an adult film and one of many young women followed by Anthony Weiner on Twitter!