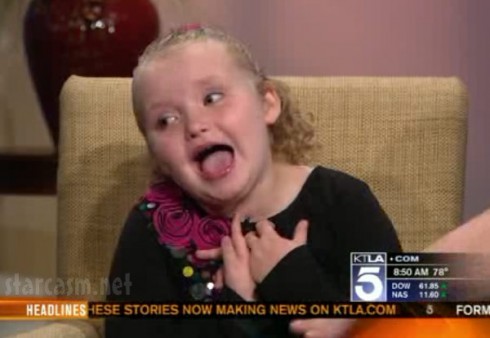 Alana “Honey Boo Boo” Thompson and “Mama June” Shannon are currently in Los Angeles making the media rounds (and otherwise continuing to take over the planet) and kicked today off with an early morning stop at KTLA for an interview with Sam Rubin and Jessica Holmes. Always a seemingly uncontainable bundle of energy, Honey Boo Boo was even more so during the interview as she went from fervently dueling Rubin in Rock, Paper, Scissors to belting out her own version of Katy Perry’s “California Gurls” — all while Mama June was trying to answer questions about the show.

June says Alana no longer drinks “Go-Go Juice” so I’m not sure what she had for breakfast that had her so wired! Perhaps June is right and she just gets ramped up when the cameras are on. June apologizes early on, saying, “Sorry she’s watching herself on the screen and there’s no telling what kind of reaction you’re going to get out of her.”

Although it’s hard to not pay attention to Honey Boo Boo, it’s well worth it to try because June once again offers up some very insightful comments about her family, the show, and people’s reactions to both.

“June, let me ask you a question, in the nicest possible way,” Sam Rubin starts. “You guys are enormously popular. Are people laughing with you or laughing at you?”

“You know, I’m sure there’s people laughing at us,” June says. “We’re laughing at ourselves too.” I think that speaks volumes about the healthy approach the family is taking toward their success.

And people can continue laughing with and at June and Honey Boo Boo as they are scehduled to make numerous more appearances today, including TMZ, Extra, and Jimmy Kimmel Live.

Honey Boo Boo is one of Barbara Walter’s Most Fascinating People of 2012, Adam Levine thinks she’s the ‘Worst. Thing. Ever.’