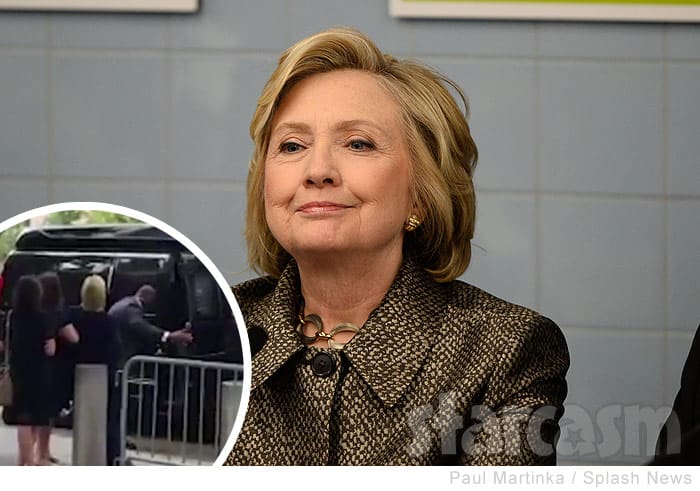 The central focus of the 2016 presidential election completely shifted earlier today when Democratic nominee Hillary Clinton had to leave a 9/11 memorial ceremony in New York City early after appearing to faint before stumbling into a van while being assisted by multiple people. The “overheating” episode comes at a time when many Republicans have been questioning Hillary’s health — a concern that most everyone dismissed as the over-sensationalized rantings of conservative conspiracy theorists. Until today.

Let me make it clear that I didn’t give much credence at all to the claims about Hillary Clinton’s health, and I clicked on the video of her getting into the van after leaving the ceremony with the intention of shaking my head in judgment at the overreaction in the media. But, the video is startling. Here’s the clip:

TMZ even shared a photo of Hillary Clinton’s shoe, which reportedly fell off as she was entering the van.

It was 90 minutes after Hillary was helped into the van and taken away before her spokesman Nick Merrill issued this statement about the episode:

Secretary Clinton attended the September 11th Commemoration Ceremony for just an hour and thirty minutes this morning to pay her respects and greet some of the families of the fallen. During the ceremony, she felt overheated, so departed to go to her daughter’s apartment and is feeling much better.

It’s important to note that the weather in New York City at the time of the ceremony was in the low 80s.

Do I think Hillary Clinton has serious medical issues that might affect her ability to be President of the United States? I don’t know. But, it is something that now has to be addressed by more than just a “trust us” statement from her team.

Chris Cillizza of The Washington Post, who just last week wrote an article calling concerns about Hillary Clinton’s health “absurd” and “ridiculous,” had this to say today:

Whereas Clinton and her campaign could laugh off questions about her health before today, the “overheating” episode makes it almost impossible for them to do so. Not only has it come at a time when there was growing chatter — with very little evidence — that her health was a problem but it also happened at a 9/11 memorial event — an incredibly high-profile moment with lots and lots of cameras and reporters around.

…Taking the Clinton team’s word for it on her health — in light of the episode on Sunday morning — is no longer enough. Reasonable people can — and will — have real questions about her health.

Surprisingly, Donald Trump has yet to bluster about Hillary “overheating” on Twitter yet. I’m sure it will happen soon, then continue for the next two months. My guess is that he’s already setting up a photo op taking a jog in Central Park wearing a tracksuit. It will be the perfect opportunity to launch his new Celebrity Apprentice themed slogan: “You’re tired!”