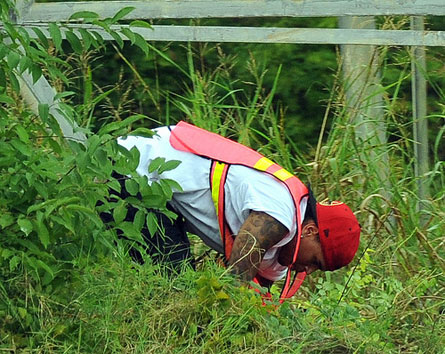 Chris Brown left a tip on Twitter yesterday before he headed off to his hard labor community service, so everyone from miles around showed up with cameras to watch him sweat. This was a win-win situation, really. Chris Brown probably wants everyone to know that he’s really doing the work, and in turn, everyone gets to watch his pick up trash, pull weeds and shovel horsesh*t.

Horsesh*t is an appropriate punishment, because that’s what was mostly coming out of his mouth during his Larry King interview. They’re going to switch up the locations of Brown’s manual labor sites from day to day for his safety, but if you’re in the Virginia area and really want to find him, keep your eye on his Twitter account and follow the smell of horsesh*t (will be present whether he’s around horses or not), regret at being caught, and the sweet aroma of Superstar sweat. Superstar sweat doesn’t really smell so good when they’re at the gym trying to buff out the body, but if they’re on the site of the road picking up used condoms, diapers, and KFC bones making retribution for domestic violence, it can be one of the sweetest smells there is. Might even mask the stench of horsesh*t, so keep your noses open for the complicated bouquet.