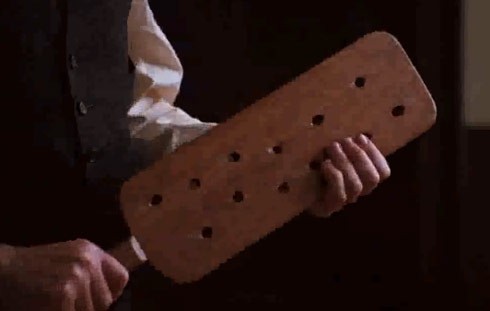 A Florida father wanted to punish his 12-year-old daughter by paddling her. To avoid being accused of breaking any laws he contacted the local police to come supervise.

According to WPBF, the daughter got into a heated argument with her sister on Monday. The father wished to discipline her with a spanking and contacted the Okeechobee County Sheriff’s Office to send an officer to observe and verify that no laws were broken.

An officer responded to the call, came to the residence, observed the paddling and determined it was within legal bounds and then left – this according to an official police report.

Surprisingly, this is not a rare occurrence. Undersheriff Noel Stephen said:

“It happens. It’s definitely not something we advertise to do, and even though law enforcement has been willing to help out in this situation, watching a parent discipline their child is something that’s done only when a deputy has no other calls to handle.”

Stephen added that he has personally supervised approximately 12 spankings.

The concern is understandable from the father. South Carolina mom Amber Tyler was arrested in January of 2013 and charged with cruelty to children after using a belt on her 7-year-old son when he got suspended from school for bringing a razor blade to class. She later used a pair of flip-flops to spank him after he screamed at a babysitter – she says that on both occasions she hit him on the buttocks.

Tyler said at the time, “I’m sorry that I spanked my son at this point in time, but if he brought another razor blade to school I’d spank him again. What if another child had been hurt? How guilty would I feel then? It’s not fair to throw a parent under the bus just because they disciplined their child.”