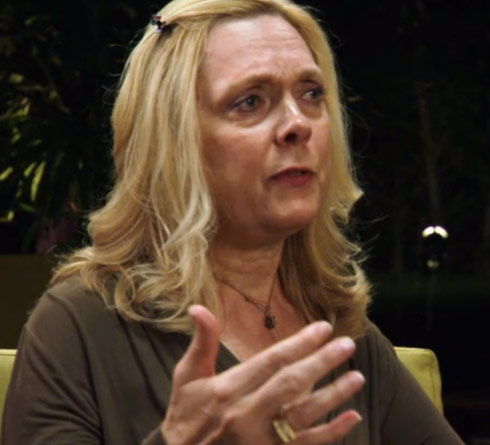 An interesting little tidbit flew under our radar from Farrah Abraham’s continuously fascinating appearance on the latest run of Couples Therapy. One of our readers, (thanks SS – via the comments section) pointed out the following bizarre story Farrah shared about mom Debra Danielsen in a clip the network only posted online.

Farrah is sitting with Taylor Armstrong and John Bluher as she spins a crazy yarn about her mom getting scammed out of $250,000.

“My mom was telling me, ‘A person I’m dating and who I was also a business partner with ended up dying in Malaysia…’ She was under the impression yeah that they were like going to be engaged and married when he got back from Asia. Then she signs a partnership agreement for like an oil development deal. So she like sends him 250 something thousand dollars… Did you ever meet him mom? ‘No.’ Never f**king met him!”

After agreeing that the whole thing was crazy, Taylor jokingly asked John, “Maybe I should set up a Malaysian bank account. Do you think anyone would wire me some money?”

Since that episode which aired on the 20th (old news I suppose – but figured this was worth sharing), Abraham has posted a couple of Keeks but did not address this clip or the allegations directly. Michael Abraham also posted after the episode, which featured Farrah and Debra on-air sitting down together with Dr. Jenn, but made no mention of it either.

So did this really happen to Debra? Who knows at this point but usually with Farrah someone will publicly address the claim sooner or later.

– Thanks again to our reader for pointing this out to us! We always welcome any tips on stories – just drop us a line via the About Us link above or message us on Facebook.

Farrah Abraham helps children in Cambodia by giving her dogs a spa day?