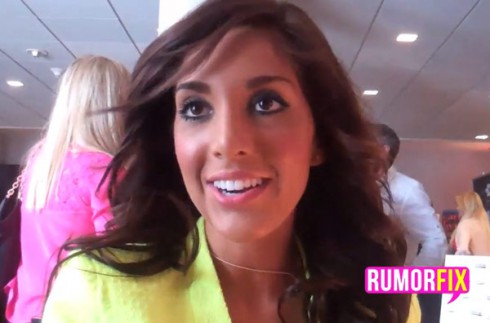 As we previously reported, former Teen Mom star Farrah Abraham is currently working on a spin-off reality series, but she has been pretty tight-lipped about the project. Until now.

The 21-year-old single mom talked with Rumor Fix (apparently in front of a wind tunnel machine) about a number of projects she currently has in the works, including the spin-off show, which she says is “going to be more or less about my culinary background.” She adds that it would also feature some of the “other new products I’ll be coming out with,” and “of course my mom drama.”

“I love my mom but there’s just that natural hemisphere of drama.” Hey, maybe that’s what they could call it! Farrah Abraham’s Natural Hemisphere of Drama!

In addition to talking about her new reality show, Farrah also talks about her new book, which is apparently a children’s book about a pacifier (which makes sense given how long Sophia still has hers). “This is my children’s book that I’m writing with Sophia, my daughter,” she starts, “and it’s really about her pacifier, so I think mothers will really enjoy it.”

Farrah also plans on following up her infamous endeavors in the recording studio with another music project, this time featuring Sophia. “We’re just making some cute baby and mommy music so, like, other moms can do baby music time with their children, which I think is really nice because I started doing that with Sophia, and maybe you saw it on Teen Mom, too. And we’re getting ready for my spin-off show and my next book, so hopefully I’ll be having a parenting book coming out.”

But wait, there’s more! “And I think also since I had my plastic surgery, I though tit [heh heh] would be great to team up with a great doctor and talk about some plastic surgery things because those are on the rise.” That makes since given how much Farrah has been promoting her plastic surgeon and the fact that there was a camera crew inside the operating room with Farrah during her procedures.

Surprisingly, Farrah didn’t mention her F&S Restaurant, which should be opening in Omaha soon according to previous interviews she’s given. Something else she didn’t mention? That scary blonde girl over her right shoulder! 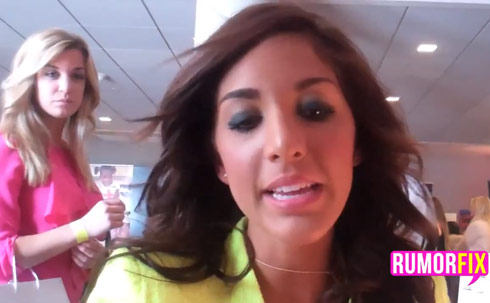