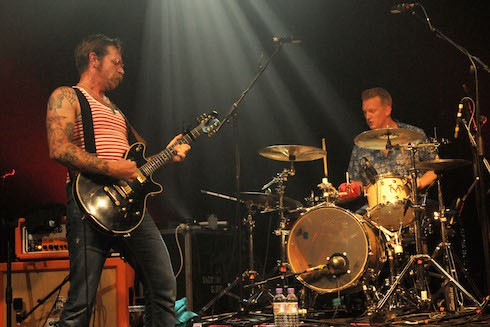 Eagles of Death Metal, the California band who were in the middle of a show at Paris’ Le Bataclan theater when last week’s terror attacks broke out, have discussed the attacks for the first time in a new interview. The band was performing for a sold-out crowd of 1,500 people when three black-clad men armed with AK-47s entered the back of the hall and began firing into the audience. 89 people were killed–among them Nick Alexander, the band’s merchandise manager–and approximately 200 wounded in the attack.

Upon hearing the gunfire, the band immediately dove for cover and escaped through a side door before the hostage situation ensued. Now, two of the band’s members, frontman Jesse Hughes and drummer Josh Homme, have been interviewed about the attack for the first time. (Homme, though a founding member of the band, was not drumming for Eagles of Death Metal during its European tour, because of committments with his band Queens of the Stone Age.)

“Several people hid in our dressing room,” says a clearly distressed Hughes, “and…the killers were able to get in, and killed every one of them, except for a kid who was hiding under my leather jacket.”

“The killers got in your dressing room,” the interviewer repeats.

“Yeah,” Hughes responds. “People were playing dead, and they were so scared…

Eagles of Death Metal–who are a rock band; their name is an inside joke–have canceled all shows and other events in the wake of the attacks. Vice will release its full interview with the band next week.