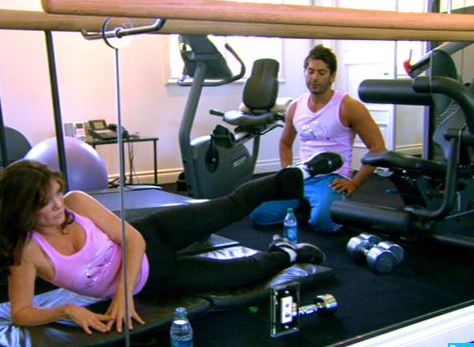 Part 2 of The Real Housewives of Beverly Hills reunion was a humdinger.

Probably the most shocking aspect of the night is when Lisa Vanderpump and her husband Ken Todd revealed that their former houseguest Cedric Martinez told them he hated them, and tried to blackmail them.

According to Lisa, the day Cedric moved out he flew into a rage over Ken telling him to pick stuff off the floor and stormed off with Ken’s luggage. (Ken later revealed that before he left Cedric told Ken “I f**king hate your wife, and I hate you, and I hate your f**king kids.”

The next morning he called them and asked to meet. When they showed up Cedric asked for something they “weren’t prepared to give him” to keep him from selling lies to the tabloids.

Bravo caught up with Cedric, who, surprise, surprise, is trying to break into the acting biz. He claimed he left because Lisa’s ego was so out of control, compared himself to a blind dog (named Bookie), and explained “I’m not Giggy. The bottom line is I’ve got fur, and I’m not Giggy.”

In the video below Cedric also claims that Lisa only cares about appearances, and has two faces. He also complains that he only got compensated in “flowers and puppies” for the work he did for Ken and Lisa and that his duties included sitting on the floor and listening to Lisa talk while she worked out.

What Cedric didn’t mention is that he also got to live in a luxurious house rent free with all his living expenses taken care of (including a car, immigration costs, travel, and vacations.)

PHOTOS: Sorry ladies Colin Hanks is off the market