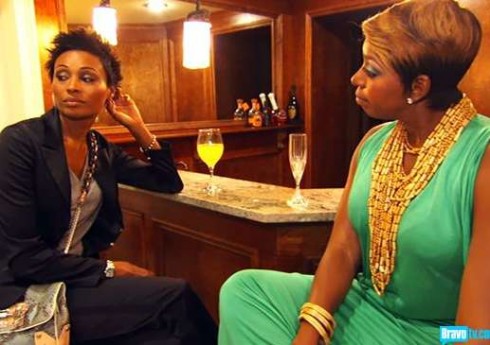 On tonight’s episode of Real Housewives of Atlanta, Cynthia Bailey, who has grown kind of close to Nene in previous episodes as she deals with marital struggles, offered up Nene a puzzling friendship contract.

It starts out with a grade-school “Do you want to be my friend? Circle yes, or no.”

If you make the commitment and circle yes, you are then in a binding year-long, automatically renewing, friendship contract that can only be ended with a notarized letter signed by the president of the United States!

The president usually has a lot of his plate, but I’m sure he can find the time to divorce Cynthia and Nene’s friendship if it starts to go sour. The president has to have priorities!
Here’s a clip of Nene and Kim Zolciak analyzing Cynthia’s interesting friendship tactics:

Pretty crazy, but Cynthia says the contract was just a joke and shouldn’t be taken seriously.

Here’s what she said on her blog:

So let me get this straight. Last week Peter and NeNe go at it, this week they kiss and make up, and now, all of a sudden, I am SINGLE BLACK FEMALE, who happens to be a lesbian, and is in love with NeNe? I want Nene, NeNe wants Peter, and Peter just wants the Jets to win the Superbowl. Does this even begin to make sense? Crisis!

Where do I start? The FRIENDSHIP CONTRACT. Here we go. At this point on the show, we are all in a bad place, all three of us. Peter with UPTOWN, NeNe with Gregg, and me with the wedding and Peter’s Uptown situation. Everybody is stressed out, and my friendship with NeNe is definitely on the rocks. I have a great sense of humor, so I decided that the next time I ran into NeNe, AS A JOKE, I would give her a FRIENDSHIP CONTRACT. AS A JOKE! As you guys know, the word friend does not carry a lot of weight with this group, so I thought the idea of giving NeNe a contract was hilarious!

I imagined that we would read it, laugh hysterically, grab a glass of wine (as usual), give each other a big hug, and call it a day. NeNe is one of the craziest friends I have, and one of the reasons we talk so much on the phone is because we are both very silly. NeNe has been good for a laugh or two when I really needed one, and I just wanted to return the favor. My FRIENDSHIP CONTRACT was for NeNe’s eyes only, and I never thought for a second anyone else would see it. It was supposed to just be a funny joke between friends, and that would be the end of it. Clearly, it didn’t work out that way. You guys saw the turn of events after we left Kim’s kitchen, and at that point it just got too ridiculous for me to even go there. The only thing that I wanted to make clear (as if it wasn’t obvious in the first place), is that the FRIENDSHIP CONTRACT was a joke, that’s it. That’s all it was ever meant to be. It was supposed to be funny, and I actually thought it was. I really cracked myself up about the whole thing. Well, excuse me for having a sense of humor.