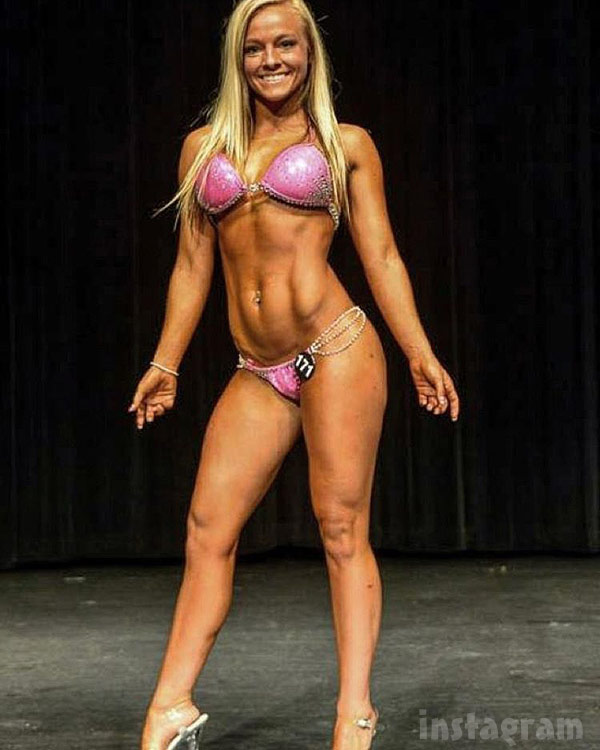 Teen Mom 3 star Mackenzie McKee has always made health and fitness a priority in her life, partly because she has to in order to manage her Type 1 diabetes. But, over the past year, the 21-year-old mother of two has completely dedicated herself to fitness, with the hopes of becoming a National Physique Committee (NPC) competitor! That dream became a reality earlier this year when Mackenzie entered her first NPC event in Texas in August.

Mackenzie continued her diet and workout regime with the intention of entering another NPC event earlier this month in Tulsa. The results were extremely positive: Mackenzie took home 2nd place in fitness and 4th place in the bikini portion of the competition! Mackenzie posted the bikini photo above, from the NPC Oklahoma Grand Prix competition, on Instagram, and wrote this lengthy caption expressing her pride at what she was able to accomplish with a TON of hard work:

So this show ended it for npc of 2015… 2nd in fitness and 4th in bikini and I’m very happy with the turn out. How far I have come since show one back in August is crazy . And to think I’m only going up from here brings such joy to my heart. I started with believing in myself and I was half way there. Placing 1st or not, anyone who has what it takes to go through prep and walk on stage is a champion in itself. Not many can even handle what it takes for this sport. If you do it to impress anyone else other than yourself you will fail. I do this for myself and myself only. It’s what makes me happy and it does not matter if no one else agrees. This sport has taught me to dream big, have self discipline, structure, and how much hard work pays off. Ive been told I’m gross, too manly, and I’ve been told I’m too soft and need to bulk up, I’ve been called big I’ve been called anorexic and I promise you will see one nasty comment below. But it all goes to show that you can never please everybody so do you, keep your head high, and love yourself so you can love others and live a happy life. I’ve already got all my 2016 show pretty much planned and 2016 WILL be my year… #npcbikini #npc #loveyourself God bless ~XOXO

Here’s a photo montage of Mackenzie from the competition, in which it seems pretty obvious why she did so well: 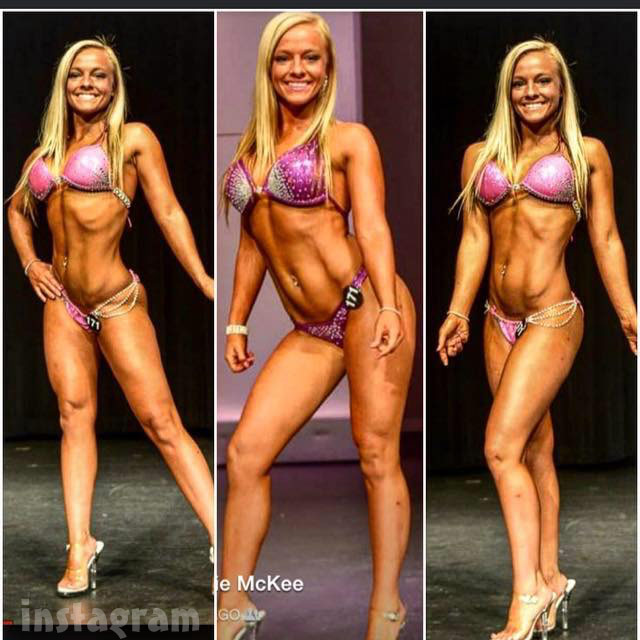 And just in case you were wondering if Mackenzie has got the goods coming and going–yeah, baby’s got back: 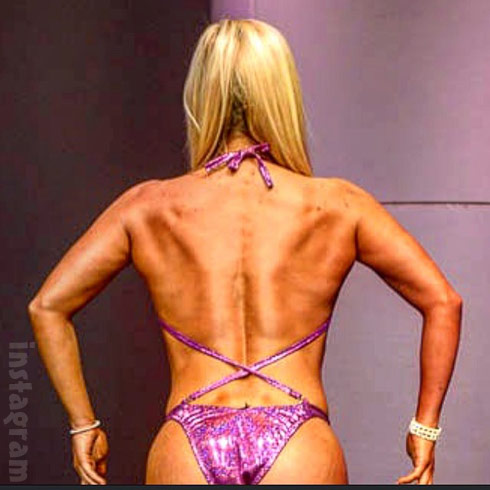 In addition to the bikini portion of the competition, Mackenzie also danced — as a pirate! “Mrs.Pirate had fun on stage,” Mackenzie captioned this next photo, adding, “this brought me back to the cheer days:” 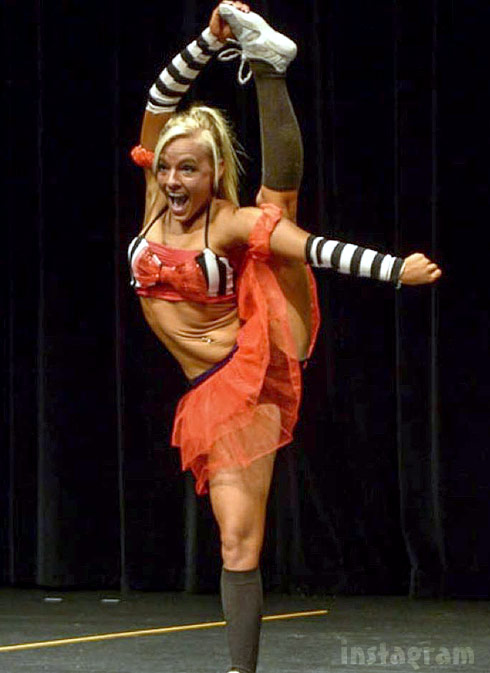 In addition to motivating her to live a healthy life, participating in the NPC events has also helped Mackenzie meet a lot of inspiring people she can now call friends. She shared these photos of some of the other competitors and revealed what the experience has been like getting to know other dedicated individuals with similar goals:

My fitness babes ???????… Ya they are pretty much awesome from the inside out. This sport has brought me so many great life long friends who have such a passion for health and a helping heart. I don’t even want to know where I would be with out them. We got Oklahoma, Kentucky, Texas, and Illinois all in this picture. Goodness I love these pretty ladies. And before you say something rude I would like for you to check out the link in my bio and read my latest blog. It’s been on my heart to share it with you. Also be sure to like my Facebook page because I have so many excited things coming and that page will keep you all updated?. ~XOXO Mackenzie

Unfortunately, Mackenzie’s experience has not been all positive. Because she has been kind enough to share her fitness journey online via her fitness blog, Facebook, YouTube, Instagram, and Twitter, Mackenzie has had to deal with the inevitable negativity that goes along with posting pretty much anything online. In a new blog post titled “We Are Women!!!” Mackenzie talks about dealing with the negativity at length, and how she has learned to ignore it (for the most part) and focus on the positive.

The blog entry starts with Mackenzie acknowledging how much emphasis women place on their appearance, an emphasis empowered by television, magazines, the internet, and fashion. “But something we Ladies seem to be forgetting in life is that not only should we be trying to have healthier skin, bodies, hair, nails, etc, what about a healthy heart, mind, and soul???” Mackenzie asks.

Having a positive and happy heart is such a great start to fitness and health. Who the heck are we if all we do is look at another woman and think of nothing but negative things to say? Who are we if we live in an unhealthy negative mindset? It causes stress, and stress leads to unhappiness, sleepless nights, weight gain, and depression. So how can we even do this crazy thing called “life” with all that nonsense going on? No one, or no obstacle in life can determine your happiness except YOU! Its all your choice. Its crazy to think how much control our minds have huh?

Mackenzie goes on to talk about overcoming things in your past, forgiveness, and how easy it is to think that a pill can solve your problems:

Am I dissing anyone that’s taking medication? Not at all. I’ve been on a lot of them myself actually if you want the truth. Until you realize that your mind has so much more control than those pills do, it will never go away for ever. I hope no one gets offended by this but I say it in a blunt way because that one sentence someone once told me “Your mind has more power than those pills you’re taking daily.” was LIFE changing. And that person who told me that was not even trying to help me out in the least bit. BUT LITTLE DID SHE KNOW, HAHA. Why didn’t the doctor tell me this? He could have helped me a long time ago. 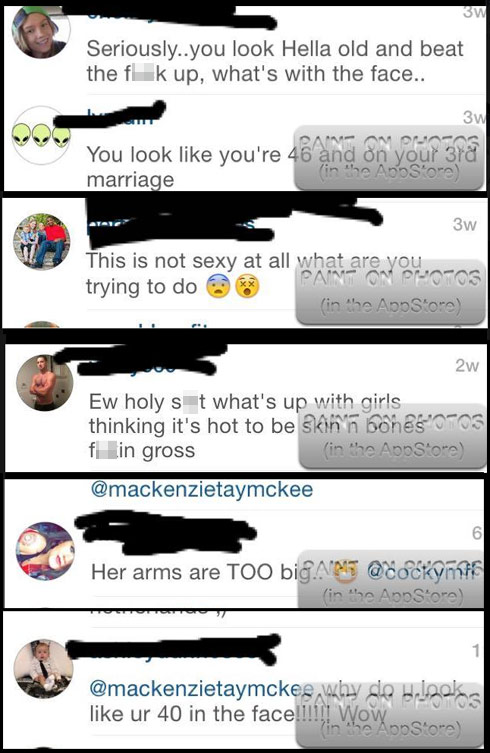 Mackenzie’s comments on the hateful remarks:

This is what woman think of when they see another human… Another human they have never even spoke to. It really does blow my mind sometimes. Did it use to hurt me? Yes, but once I became happy and positive myself, things flipped and I began to hurt for THEM. Yes!!! when I read this stuff, it makes me feel sorry for them. What are they going through in life that has made them so harsh/negative/cold hearted. And yes, I will say I have been rude to others myself, we all have. But they hurt me first so I got them back. Nope I didn’t get them back, I actually just put myself on their level… LOW, THE LEVEL IS LOW LADIES. Which after all, when I sat and looked at all the negative comments and all the positive comments, the positive out weighed the negative by a long shot. And most of the time that is how it goes, its just OUR choice which side to look at, the negative? Or the positive? 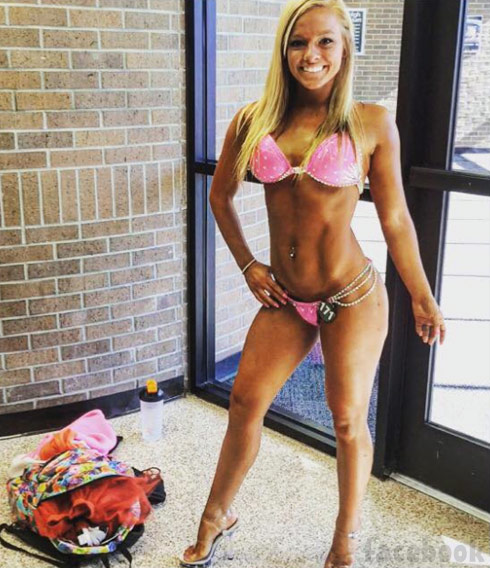 Mackenzie concludes by iterating positivity and light, even in the face of so much apparent darkness:

So yes, by the end of this blog it all goes back to fitness and health. If you are wanting to change your life and become more fit and healthy, start with your mind. Clean out your heart, fill it up with happiness and positiveness because you CAN’T go forward if you’re stuck in the pond of sinking sand full of negativity. Your fitness and health journey will fail. You will not only feel better to get out of bed in the morning and hop on that treadmill, you will take stress out of your life and add many years to it. If this blog inspires one person to change their mindset and become more healthy minded, I have achieved everything I wanted to by typing it. -XOXO Mackenzie McKee.

In addition to sharing photos and videos of her fitness journey, and then her inspirational thoughts about living a positive life, it’s important to remember that Mackenzie is always first and foremost a mom:

My daughter just pooped on my laptop ?