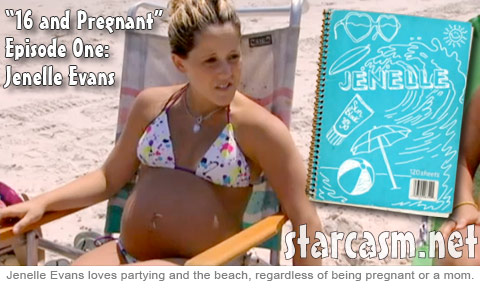 MTV’s 16 and Pregnant premiered last night with Jenelle Evans, the beach-going party gal from Oak Island, North Carolina. As everyone expected given Jenelle’s unapologetic stance on smoking pot before during and after her pregnancy (read more about that HERE) as well as the spirited profanity-laden tirades from the trailer, Jenelle was quite explosive and controversial!

UPDATE – If the link is dead you can hop over to AMAZON.COM and watch the entire episode online for only 99 cents!

The episode begins with Jenelle already 8 months pregnant on the beach describing her affinity for partying and surfing. In a bikini-clad conversation with her friends in lawn chairs on the beach, Jenelle responds to friend Lauren’s story of a cousin that continued to party while pregnant:

Jenelle: I still go out and hang out with my friends, but I don’t take it to – I take it to a certain extent. I’ll go to parties and stuff, but I won’t drink

Lauren: Those girls would just, like go out and be like, “Hey mom, you wanna watch my kid?”

Lauren: But you’re gonna stay home with your kid and like take care of him and stuff?

Jenelle: I’ll watch a movie with him other than just go out.

Fast forward to a few weeks after Jace is born…

Jenelle: After working all day my mom was not in the mood to watch Jace tonight, but my friends are throwing a party and I’m going.

Jenelle’s Mom: Jenelle, why is it you can’t even stay home? This stuff about going out every night, it’s gotta stop! 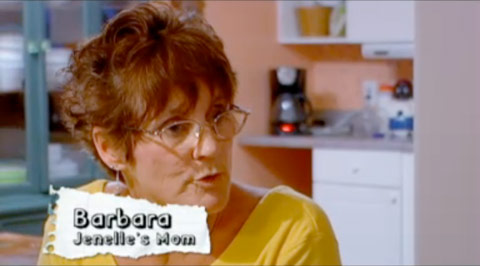 Jenelle: I’m not going to go out every night, I’m not gonna do that.

Jenelle’s Mom: You’ve been going out every night this week! If you don’t want to raise it, say it, and then we’ll find a good family who will raise it. Is that what you want? Is it too much work for you Jenelle? Is the responsibility to great for you Jenelle to give up your freedom? Is it? Jenelle?

Jenelle: Could you leave me alone? Or I will leave tonight and you will never see me again, because I will leave at the sign of bulls***.

Jenelle: So are you going to watch him or am I taking him with me? Because I’m about to leave right now.

But, like most of these episodes, Jenelle has her “midnight hour” moment when her friends Lauren and Amber basically tell her the same things her mother has been telling her about taking responsibility and realizing that even if she is still a teenager she is more importantly a mother now and that requires a shifting of priorities. Words that seemed confrontational from her mom were hard to defend against when it was coming from her friends and Jenelle finally seems to have the humility to tone down the bull-headedness and take a long, hard look at herself. That leads to a cathartic conversation with her mother where Jenelle swallows her pride and expresses her thanks for her mom’s help and admits she couldn’t raise Jace by herself:

Jenelle: I wanted to talk to you about my decision. I want you to help me raise him while I get myself established.

Jenelle’s Mom: You know I’m going to take care of him no matter what because it’s not his fault he was born. I don’t mind doing that as long as there’s not drama going on, OK?

Jenelle’s Mom: I need you to step up and be a responsible girl.

Jenelle: I just wanted to tell you that even though you b*tch at me all the time and stuff I know that I couldn’t do this without you, so…

Jenelle: Alright, well this is what I’m doing: I’m finishing high school in January. I’m getting a job.

Jenelle’s Mom: That’s a good plan and I’ll support you on that as long as, you know, ou keep yourself together. you know, when all push comes to shove, you know it’s not all about material things, it’s all about family. That’s what it is. 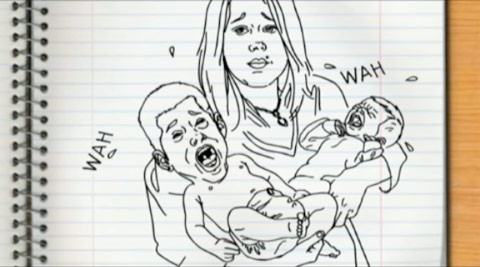 Jenelle and her two infants: boyfriend Andrew and son Jace

Jenelle appears to be a very bright girl and in the end I think she’s going to be fine. She seemed to have two saving graces in the episode – one of which was her jobless, carless and alcoholic former model boyfriend Andrew believe it or not. He was an extremely exaggerated version of herself and I think his immaturity helped Jenelle see the immature qualities in herself. The second saving grace was her friend Lauren, who seemed to be that constant voice of rationality without ever being judgmental. All of Lauren’s “Are you sure…?” and “So do you think…?” questions were gently guiding Jenelle in the direction she needed to go in order to be a good mother to her son.

It’s easy to pile on Jenelle because she is so brash and because a majority of the episode focused on her love of partying and being a kid, but like Farrah in season one we need to remember that this is a 16-year-old girl who really enjoys being a 16-year-old girl but is now faced with having to skip about four years of her life and raise a child without the support of a father. And I think Jenelle did turn the corner towards the end of the episode and if she is featured on MTV’s Teen Mom series I think she will surprise a lot of folks with how much she grows over the next year or so.

Here are some of my favorite quotes from the episode: 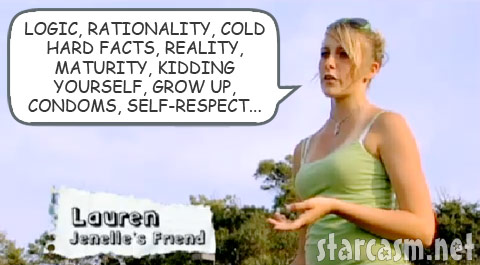 Close friend Lauren was a constant reality check for Jenelle

Jenelle, Andrew and Lauren went out putt-putting and Lauren wasn’t afraid to ask the tough questions like:

Lauren: How did you get pregnant? Were you on birth control or did not use a condom or…

Lauren: Were you just not thinking about everything you learned in sex ed? Were you thinking that one time won’t hurt?

Jenelle: I mean, me and Andrew done it other times before I got on birth control and I didn’t get pregnant, so I thought, you know, why would it change now that I would just suddenly get pregnant?
But, I did.

Andrew and Jenelle’s phone conversation after Andrew was MIA for her baby shower:

Andrew: Why haven’t you called me all day?

Jenelle: Why haven’t you called me all day?

Andrew: What are you guys doing?

Jenelle: I’m with my two girlfriends!

Andrew: Oh…God, this is bulls***. You’re pregnant and every dang-gone thing. You’re going out and stupid crap like that. Grow up. You’re nothing but a d@mn piece of crap, because look at you. 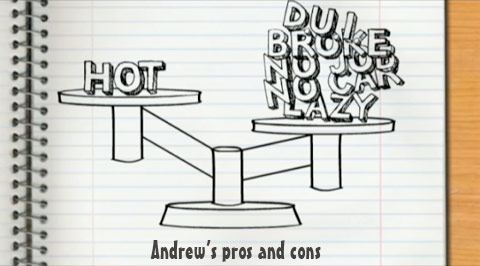 Jenelle: You know how f***ed up you just sounded?

Andrew: It dears our dang-gone relationship up. You know how stupid you look? You’re not even grown up yet to have a dang-gone child.

Lauren: That is so screwed up. You don’t need him.

Jenelle: Andrew! I’m not grown enough to have a child?!? You have no job and you got your license taken away and you’re an alcoholic. Who’s the one that isn’t grown up Andrew?

Andrew: You’re nothing but a piece of crap. I’m sick of it. I’m done. Alright, goodbye Jenelle.

Talking about Andrew and the phone conversation:

Lauren: Do you really want your baby to be around somebody who’s going to talk to you like a dog? Like, do you want that? 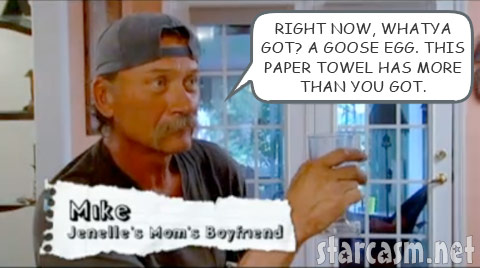 Another favorite of mine was Jenelle’s mom’s boyfriend Mike, who was just brimming over with Zen-like insights:

Mike: Right now, whatya got? A goose egg. This paper towel has more than you got.

But there’s just no topping Andrew, who seriously needs to be on Intervention or possibly his own dating reality show The Slackelor:

Andrew (after revealing that being a former model somehow made him “overqualified” to work at McDonald’s): The economy sucks right now from depression.

Andrew wins the gold, silver and bronze medals in the insincere Olympics, but he had one standout moment in the hospital room holding his newborn son Jace:

Andrew: Well, I’m just gonna stay up. You see, he gets to go home with you. He can’t go home with me. I’m gonna cherish every single moment I have with him.

(I think the show finished up about four weeks after that “tender” moment and Andrew never once came to see Jace during that time.)

I’ll wrap things up with a couple quotes from Jenelle:

Jenelle: I think once I mature more I’ll grow up.

Jenelle: After these couple of months I’ve been thinking a lot about being a mom, and I’m starting to realize that I’m not ready.

I can’t wait for next week’s episode with Nikki! Although it seems impossible, her boyfriend looks to be even worse than Andrew judging from the preview clip! And be sure to read about 16 and Pregnant cast member Ashley Salazar who has been blogging about her pregnancy and eventual adoption all along!