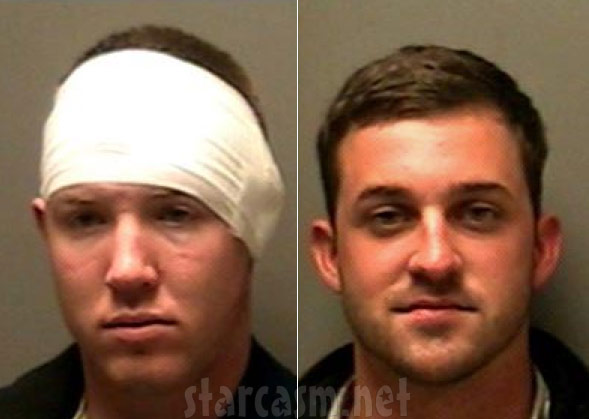 We’ve all been there man. You hit up McD’s for a little fast-food goodness and you discover that they got your order wrong. You go back in and get it corrected, you drive off ticked off but too lazy to go in and do anything about it or you get home and have your significant other give you “that” face because “you” messed their order up.

Or… If you’re Sean Mosey and Chris Slate of Murfreesboro, TN (pictured above) you devise a plan, return incognito at 3AM and toss some bricks through the window in an act of drunken vigilante misjustice! I guess that’s one way to go about it.

Time for some of that ol’ lovely local reporting footage:

Slate told the cops that he and his bud went through the drive-thru and didn’t realize their order was incorrect until they got back to the pad where they had been poundin’ some brew-dogs. Slate and Mosey headed on back to straighten the situation out and it was at this point when he claims that the manager flashed some serious ‘tude at them.

“We got cussed out and told to get the ‘F’ out of their line,” Slate said. The two left the restaurant dang good and upset at how they were mistreated.

“We were ticked. I mean ticked is an understatement. We hung out and drank more, and everything went down.”

You see, Slate had a plan man. And the two followed through according to police reports. Via WTVF:

The two men removed their shirts and used them to cover their faces. They also took the license plate off of Slate’s car and parked it in a near-by parking lot. Police said the two men then went up to the McDonald’s. Slate is accused of throwing a brick through a front window of the restaurant. The report said Mosey threw a piece of concrete at the drive-thru window. Two employees inside were slightly injured.

Slate left the scene before police arrived. When police responded, they found Mosey crawling from the road, near some shrubbery. They said he was very unsteady on his feet, had slurred speech, and had suffered some injuries.

Worst. Plan. Ever. Heck, Slate even admitted to it, “Our stupid plan got more stupid in a half second.” He added, “I am 110 percent dumbfounded, not only of what happened, but the fact that I let myself become a part of it. And I know that Sean feels it too.”

Slate plans on apologizing to the McDonald’s and the City and plans on entering an alcohol treatment program.

Both men were arrested and charged with vandalism over $1,000 and felony reckless endangerment. Mosey was also charged with public intoxication.