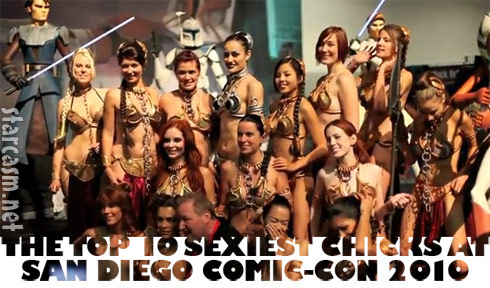 San Diego Comic-Con 2010 is over, but we’re still left with the memories. In addition to felonious corneal assaults with writing utensils, endless new trailers and the billion dollar makeup budget for Will Ferrell’s Megamind, we have…

That’s right – they’re the icing on the sci-fi/fantasy Comic-Con geekdom cake. They’re sorta hot girlfriends magically transformed by brightly colored spandex (or the metal and cloth finery that could only come from Jabba’s Palace) into living, sexified super-heroins. They’re also bombtastic professional models hired by movie and video game companies to stand around so that poor, unsuspecting attendees will associate their movies and video games with the horizontal mambo. And lastly, they are the certified Grade-A celebrity babes that now take time out of their busy schedules to show up in person and pay their respects to ticket- and game-buying dorks (like me) by wearing Versace and participating in panel discussions.

They are all of these things, and they are spectacular! They are the sexy chicks of Comic-Con!

Before we delve into the still images, here’s a little preparatory video put together by RedoTV on YouTube highlighting in live action some of the fantastical eye candy at this year’s Comic-Con:

Using the resources available to me I’ve compiled the “Top Ten Sexiest Chicks at San Diego Comic-Con 2010” for your viewing pleasure. I will offer up at least one photo of each of the finalists as well as brief commentary explaining why I included them on the list. Blah, blah, blah… Let’s get to it!

10. Leelo from The Fifth Element

This one actually wasn’t as sexy to me as I thought it would be when I saw the thumbnail – there’s something a bit defeminating about how this infamous costume looks on her. But, that being said, I had to give her a TON of credit for having the guts to wear it, and despite the “defeminating,” she still has one heck of a svelte and sexy body! (Something tells me that if I saw her in person my opinion would change – just before I fainted.) (Photo: REUTERS/Mike Blake)
.

I have no idea who Viva Bianca is, but she be lookin’ mighty fine in that denim mini-skirt holding that microphone yo! Some of you may be disappointed to find some pseudo-celebrity in street clothes on the countdown. All I can say is LOOK at that woman sitting there. Oh, and did I mention her name is Viva Bianca? VIVA BIANCA! (Photo: Jerod Harris/Getty Images for MySpace)
.

(from Exit To Eden)

****UPDATE – A commenter pointed out that the costume is actually that of Paris Hilton’s character Amber from Repo! The Genetic Opera. I should have known that but I’m kind of proud that I didn’t.
.

No one can deny the power of THE HOFF! You can look like you’re taking a dump in the middle of the street (Like Taylor Ann Hasselhoff there on the right) but you are still dayumm sexy as long as you’re next to the Baywatch Sausage! Taylor Ann is joined by her sister Hayley Hasselhoff on the streets of San Diego as daddy Hasselhoff sings for his German fans. (Photo: Frazer Harrison/Getty Images)

Is that a Hasselhoff reality show bus in the background? Do they have a reality show I don’t know about?!? Does anyone out there know what The Hoff is singing? Is there a video of this event? If I marry one of those girls can I change my last name to Hasselhoff? Alas – wherever The Hoff goes there are always more questions than answers…
.

This next sexy Comic-Con chick represents an entire genre of sexy Comic-Con chicks. She’s that quiet girl that dates your best friend and completely tolerates his (and your) obsession with video gaming. She’s kinda nerdy too – and kinda pretty – but she always wears clothes that don’t quite fit right or are only sexy in a K-Mart fashion kind of way.

Then, on Halloween and during Comic-Con, something strange happens. She puts on the next-to-nothingness of a super-heroin or video game warrioress and all of a sudden you feel completely awkward around her. And what’s frustrating is your best friend doesn’t even notice or care – he just wants to get to the Halo panel on time. He doesn’t realize what an amazing…

What? Oh, sorry. I’m not sure why I was rambling on like that. Here’s a zoomed in photo of Star Sapphire’s eyes that seem to say, “Hey, maybe we should have been the ones to get together. We could have….” Oops, there I go again.

(My apologies for that top photo. Every year there’s some guy for Reuters – apparently his name is Mike Blake – who goes around taking photos of people in costumes with some sort of blurring filter – I guess to represent comic book motion or something. My guess is that he did it one time a couple years ago and actually got a cool picture or two people liked so now he ruins rolls and rolls of digital film every year doing the same thing.) (Photos: REUTERS/Mike Blake)
.

I’ve always fancied myself a lawful-good elf/human mix, but I have to respect my dwarf brethren and honor this luscious Anna Nicole Blacksmith! She is the St. Pauli Girl of dwarfdom! And you gotta love that sexy attitude! How do I know she has attitude? It’s all in how she places her hand on her hip – oh, and she obviously has an axe to grind. (Ha!) ****UPDATE – I really screwed up on this one. The sexy blond above isn’t a dwarf but Astrid from How To Tame Your Dragon. So go ahead and scratch out “DILF” and insert “VILF” for this sexy Viqueen!) (Photo: Frazer Harrison/Getty Images)

But don’t think looking like a dwarf with attitude is all you need to get on the sexy list! Here’s another, nearly identical attempt from actress Kirsten Vangsness on the red carpet at the TV.com NOW Awards during Comic-Con that isn’t nearly as successful:

The number three sexiest chick at San Diego Comic-Con 2010 is the only professional model on the clock to make my list. (At least I assume she’s not just a fangirl.) This sexy VILF is the villainous Baroness from the G.I. Joe: Rise of the Cobra display. She’s part Angelina Jolie, part Sarah Palin and 100% woman! She’s one of those bad gals that can have a gun pointed right at the head of pretty much any red-blooded male super-hero and all he would be thinking is: “Damn, she is FINE!” And she’s got that evil, evil look in her eyes that tells me she doesn’t even do her victims the favor of seducing them first. G.I. Joe’s cobra will most certainly be rising! (Actually, actress Sienna Miller has been cast to play The Baroness in the movie. Meh.) (Photo: UPI/Earl Cryer via Newscom)
.

2a. Phoebe Price as Princess Leia

Thanks to Michael K’s contagious admiration for this red-headed lens hound I can’t help but have a soft spot in my heart for Chicken Cutlets! As a matter of fact, I made an entire post about Phoebe’s double-barreled costumegery as Jabba’s sexiest slave and the super-hero so fine they had to make her jet plane see-through. You can read that – and see more photos of Phoebe – HERE. (Photo: FAME Pictures)
.

2b. Phoebe Price as Wonder Woman

OK, I admit it – that blond chick next to Phoebe is pretty sexy too! But what can I do? She’s a hot little planet right beside the sun! (Photo: FAME Pictures)
.

I don’t even know where to begin with this fishy dish! I’ve never seen a woman who’s face looked more like a cartoon – and I think I like it! That purple shell bikini top with the pearled barnacles, her flawless and untanned skin, the over-the-top cartoonish hair… And the cherry on top is the not-so-subtle use of utensil innuendo… I will never watch The Little Mermaid the same again. (Photo: UPI/Earl Cryer via Newscom)

UPDATE!! Thanks to the magic of the interwebs I’ve learned the secret identity of the yummy Little Mermaid! Her name is Traci Hines and in addition to cosplaying as Disney Princesses she’s also a singer! Want to know more? How about a WHOLE LOT MORE?!? Then check out our Traci Hines interview with lots more Ariel costume pics and YouTube videos of her singing skillz! (WARNING: Serious crush potential – click at your own risk!)