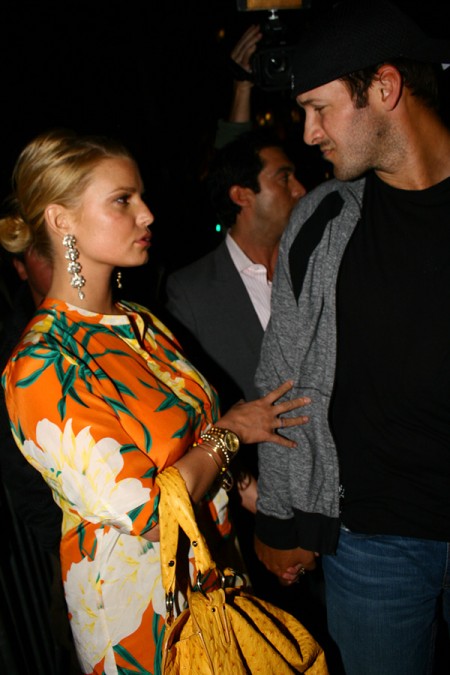 I guess the motorboating didn’t work.

This is a little cold. Tony Romo dumped Jessica the day before her birthday. Of course, he didn’t go all the way with his viciousness because he could have dumped her ON her birthday in the middle of her Barbie and Ken themed party (this isn’t a joke, she was really planning this). He could could have wrapped his breakup note in a box the shape of an engagement ring and then lapped at her salty/enraged/heartbroken mascara tears.

People.com reported that the breakup happened on Thursday night. The next day, Tony partied with 14 of his closest friend at the L.A. club My House while Jessica made a bravery-masking-sadness tweet about the demise of her doll-themed party:

“Barbie party didn’t happen, but I turned 29 and feel like I am on top of the world yelling I LOVE GETTING OLDER!”

Right now Jessica’s Twitter account is acting wonky, but you can still make out the tweet. She later tweeted that “hope floats” and reported she was sleeping with her mom and her dogs.

It’s kind of sad, really. They seemed better matched than Jessica and Nick Lachey, or Jessica and John Mayer (who would keep her from talking by telling her he liked her “spiritual side”). I always imagined Jessica wearing gingham and cooking Tony fried chicken and potato salad which they would wash down with beers while Tony watched sports and Jessica strained to understand what was happening on the T.V.

Jessica doesn’t have time for frying chicken or crying over lost relationships though, she’s going to be working full time on her new show The Price of Beauty. Jessica will get to travel when she starts shooting the show soon for Vh1. During her travels Jessica will “study the local fashions, dietary fads and beauty regimes and even participate in some of the extreme practices she discovers.”

There’s nothing that can fix a broken heart like dietary fads and extreme beauty practices.