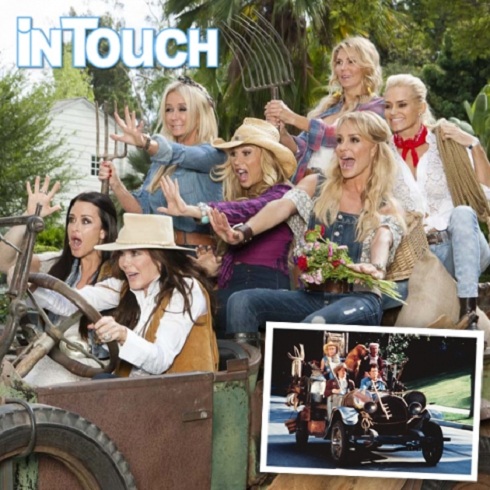 Come and listen to a story ’bout some crazy Housewives
who come on Bravo weekly to show us ’bout their lives.
Then one day they got a notion to be silly,
and dressed up for In Touch as the Beverly Hillbillies!

The Real Housewives of Beverly Hills cast seems to have put their drama aside for the sake of a fun photo. Ahead of Monday night’s season 3 premiere, Lisa Vanderpump, Taylor Armstrong, Kyle Richards, Yolanda Foster, Brandi Glanville, Kim Richards, and Adrienne Maloof teamed up to create a one-of-a-kind photo featuring the seven of them dressed up as the cast of The Beverly Hillbillies!

“It’s fun when people don’t take themselves too seriously, and with this group, that can happen,” Brandi told In Touch at the shoot, which was held at Kyle’s home in Los Angeles on October 22. With the group somewhat divided following the filming of season 3, Kyle’s home served as neutral ground for the cast.

While it was surely a fun shoot, the ladies definitely had to think out of the box to get into character of their Beverly Hillbillies counterparts. “I haven’t been called a hillbilly before!” Adrienne jokes. “But if I’m ever going to be called a hillbilly, I guess this would be the time!”

“I was happy to see everyone getting along — even though some people needed to be in separate rooms,” Brandi added. Most likely, she was referring to herself and Lisa keeping their distance from Adrienne, who they have not been getting along with since filming on season 3 began — and that’s putting it lightly.

Well now its time to say good by to Giggy and his pals.
We would like to thank you all for readin’ ’bout the gals.
You’re all invited back again to this locality,
To have a heapin’ helpin’ of these Bravolebrities!

For more from the Housewives‘ photo shoot, pick up this week’s issue of In Touch, on newsstands now! The Real Housewives of Beverly Hills Season 3 premieres on November 5 at 9/8c on Bravo.