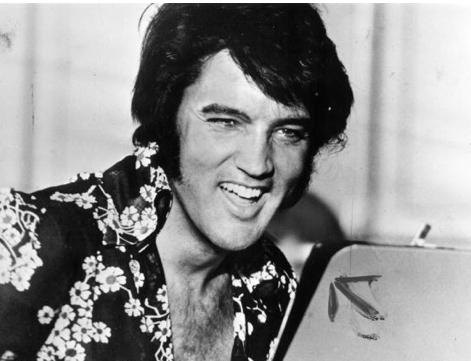 Up until now everyone thought the King Of Rock and Roll died on the toilet because his love for fried peanutbutter banana baconsandwiches and other sinful goodies clogged up his arteries and caused cardiac arrhythmia. Now his friend of twelve years and physician Dr. George “Nick” Nichopoulos claims that Elvis Presley fatally succumbed to a battle with chronic constipation. He even attributed Presley’s weight gain to constipation, not overeating, saying that the Rock patriarch would lose 20 lbs. after a healthy bowel movement.

The retired Memphis doctor told Pop Tarts about how he came to his new conclusion:

“After he died we weren’t sure (of the exact cause of death) so I continued to do some research and I had some doctors call me from different places and different med schools that were doing research on constipation and different problems you can get into with it. I just want to get the story straight – it all made sense with the new research that was done. We didn’t realize until the autopsy that his constipation was as bad – we knew it was bad because it was hard for us to treat, but we didn’t realize what it had done. We just assumed that the constipation was secondary to the meds that he was taking for his arthritic pain and for his insomnia.”

The King’s colon was in bad shape at the time of his death, it was two to three inches wider than normal and three to four feet longer than it should have been. His chronic constipation wasn’t just your average case of eating too much fast food and getting the works a little clogged. A dose of prune juice and veggies wasn’t going to clear his case up because his colon was actually in a state of paralysis. The doctor hints that this could have been hereditary, but the pain medications he was on an a constant poor diet definitely didn’t help this condition.

The average sedentary American subsists off of burgers, fried foods, and processed flour, sugar, and corn, and affected 4.4 million people in the U.S.in 1994. We can only imagine how many people are affected now, but constipation in and of itself doesn’t usually cause death. It’s usually caused by or leads do another disease like cancer, diabetes, etc. that can ultimately do us in. But occasionally, when it gets very bad, a backed-up colon can release toxins back into the body, which can create a massive body infection. According to Dr. Nichopoulos, when Presley died he had fecal matter in his colon four to five months old. Gross!