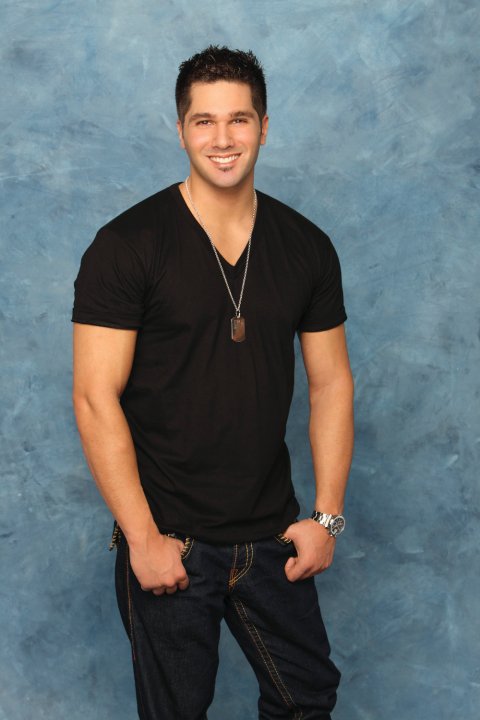 None of Ali Fedotowsky’s suitors have drawn more attention prior to the start of the season than professional wrestler Justin “Rated R” Rego! ABC released a Bachelorette Season 6 preview clip that featured the cocksure Canadian during which he confesses to Ali that he is a wrestler and then unbuttons his shirt to reveal a t-shirt with “Rated R” printed across the front. The surprising part? Ali seemed to like it!

So as I wrap up “The Bachelorette Files” just prior to the season kicking off May 24, I wanted to be sure to create one for the guy who could turn out to be the most memorable person from Season 6 – including Ali! 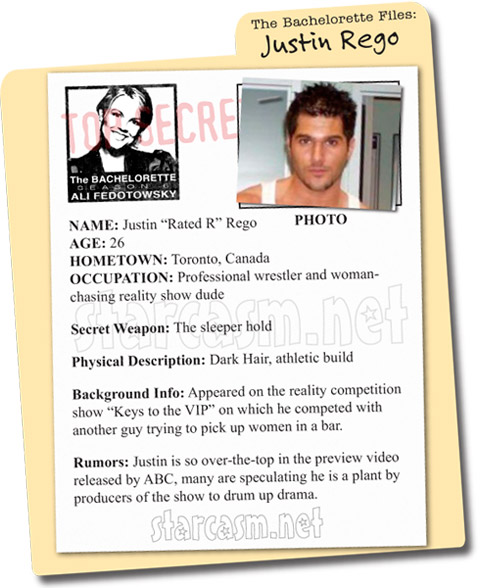 Justin Rego is a 26-year-old stud muffin from Toronto who claims to be a professional wrestler named “Rated R.” Possessing all the qualities of a Jersey Shore cast member, Rego is brash, confident, douchey and more times than not, probably irresistible to the fairer sex. Don’t believe me? Check out giggly Ali in the afore-mentioned preview clip:

Aside from the wrestler claim, there hasn’t been too much revealed about the professional history of Rego, though I imagine if you got a hold of his resume it would be peppered with things like “professional trainer” and “pool custodian.” But don’t think Justin isn’t qualified to be on the Bachelorette! To the contrary, he may be the only one in the bunch that has actual experience competing for women on a reality show!

Rego appeared on the reality show Keys to the VIP (A Professional League for Players) back in 2007. Rego Suave competed with another player named Fromeo in a series of three challenges in which they tried to pick up women in a bar while producers of the show threw obstacles in their path and a panel of judges watched via hidden camera! You can watch the entire episode (less than 25 minutes) HERE. 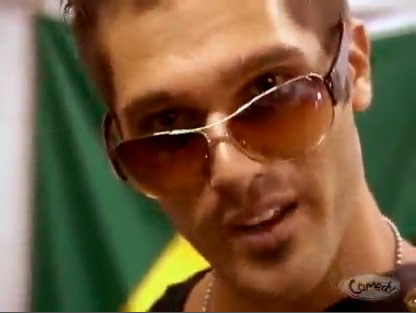 If you want to avoid finding out anything particular that happens during Season 6 of The Bachelorette then you should stop reading now!

The perennial thorn in ABC’s side, Reality Steve, has once again revealed the entire season of the show. He goes episode by episode and details pretty much each and every date, rose ceremony and elimination from the premiere all the way up until the finale. (you can catch up on all the details HERE) 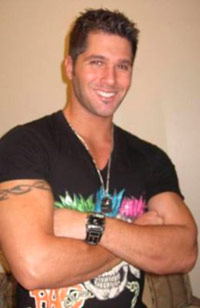 As is often the case with The Bachelor and The Bachelorette, the romancing of Ali takes a back seat to other bombshell developments during the taping of Season Six. In addition to a walk-off in the final three and someone getting a tattoo just for Ali, one of the contestants’ girlfriends actually calls Ali to let her know that her boyfriend is just on the show to promote his career!

His girlfriend, Jessica Spillas (CLICK HERE for photos of Jessica), had agreed to let Justin be on the show but found out shortly after he left for taping that he had been cheating on her with another woman in Toronto! (UPDATE – Her identity has since been revealed. CLICK HERE for photos of the “other” other girlfriend, Kimberly Kerekes!) So, she got in contact with a former Bachelor contestant that lived in Toronto as well and she put Jessica in touch with ABC who in turn put her in touch with Ali – while cameras were rolling! KABOOM!

This all goes down in episode 5, just after Ali chooses Justin over the show’s sweetheart, Kasey Kahl. The elimination of Kasey narrows the field from 9 to 8. Of course Ali is furious and boots Justin off the show immediately, leaving only 7!

Justin is going to be the uber-villain for billions of women viewers and a hero to the few hundred straight, single males watching the show from their closets at home.

Should be fun! I’m looking forward to Justin’s entrance in much the same way as the entrance of a professional wrestler and his time in the ring – I only hope Justin can make his shtick seem believable.

VIDEO The Bachelorette Ali gets a phone call from Jessica, Justin’s girlfriend!