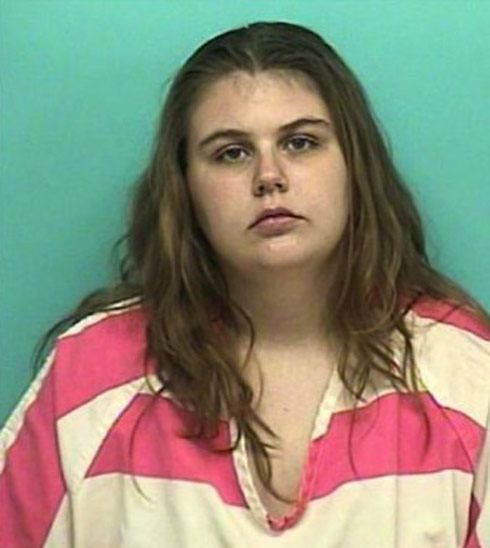 Are you ready for the recent travails of a Texas woman to take you on a True Detective-like, multi-layered exploration into the psychological limits of random local news story #WTFness? Me neither, but let’s give it a shot anyways!

This all started when 25-year-old Charlene Ellet from Porter, Texas made all the wrong kind of headlines last week after she got caught doing bad at an area Walmart. While our gal Charlene was being detained at the store for shoplifting her brother Cameron Beck, 26, came looking for her at the loss prevention office. He had come to Walmart along with his sister and her two 2-year-old twins.

County deputies searched his car, after Cameron gave them permission, and found a cut up pen and a burnt light bulb that tested positive for crystal meth. While questioned, both Charlene and Cameron admitted to having smoked them some meth about two weeks prior to the Walmart incident.

Sister and brother were then booked for possession of a controlled substance and placed in adjoining cells. Being the good brother that he isn’t, Cameron asked if the cops could only charge Charlene because he argued that her record was clean.

While the police were doing the paperwork on Charlene and Cameron they witnessed the two repeatedly kissing each other on the lips through the prison bars. Having been a little confused with the scene, one of the officers asked if the two were indeed brother and sister. Charlene confirmed that they were.

Police then separated the two from their jailhouse make out session as they took Charlene to a different room for further questioning. There she told the cops that she was adopted, that she and Cameron had different fathers but that they did have the same biological mother. She further explained that their romance began while Cameron was in prison as they wrote letters to each other and that they became sexually involved upon his release in November of last year.

Charlene also explained that she was living in a hotel along with Cameron and her twins and that the lovers would, while the kids were present, either engage in intercourse on the other side of a partition that was in the room or in the bathroom.

In Texas, half-siblings fall under the state’s prohibited sexual conduct code so the pair were also charged with this crime as well. Charlene’s twins were released to her sister.

But wait – we’re not done… Charlene made bail and was released from jail but found herself in trouble just a couple of days later, as police were summoned to the same hotel where she stated that she and her brother lived, for placing her husband in a choke hold.

Charlene and her husband (not her brother) are believed to have got in a fight over a cellphone and the ruckus left Charlene’s husband with scratches, redness and swelling that made it hard for him to talk. Montgomery County Sheriff spokesman Lt. Brady Fitzgerald said, “Apparently there was a dispute over a cellular phone at the location and the male reported that the female assaulted him. She said he assaulted her, but deputies advised that his injuries were consistent with his report.”

Charlene is now back in the Montgomery County Jail on a $50,000 bond on charges of choking her husband.

For a breakdown of this saga, I put together the following #WTF Checklist: 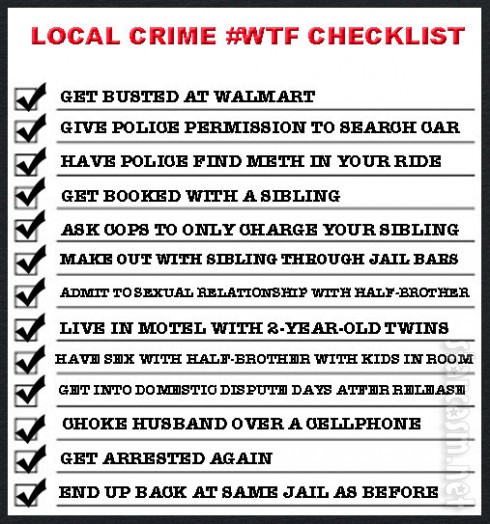