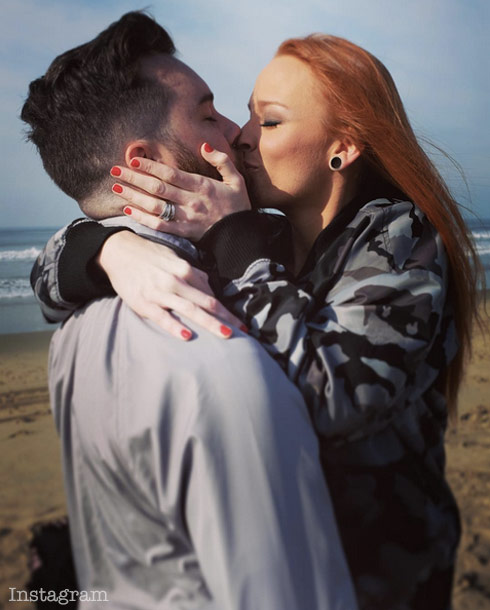 The 24-year-old posted a super sweet picture of the pair embracing to Instagram. Maci is glowing, as her hand with a diamond ring on her ringfinger, is raised to McKinney’s face.

Maci wrote, “Well y’all, my best friend asked me to marry him! I’m one lucky lady, I love you T!”

The engagement of Maci and Taylor seemed inevitable as the pair have been together now for over three years. They share baby daughter Jayde Carter and live in a house they purchased together in Tennessee.

I honestly don’t think it has actually ’hit’ me yet. But I am very excited and feel super blessed that I get to marry Taylor. He’s an amazing man and dad… We were on Venice Beach! He (and MTV) had told me that I was going to do an interview for MTV.com, which turned out to be a complete trick just to get me to the beach for him to ask me. When he asked me to marry him, I was in complete shock. I couldn’t believe that it was actually happening, and to be honest, I couldn’t believe that he had pulled it off without me figuring it out…because I usually know everything!

Bentley and Jayde were on hand for the proposal. Bentley “was shocked and emotional. He actually teared up a little bit — I think his exact words were that he was just so happy that T-Money was finally going to be his step dad,” Maci said.

And oh yeah, Taylor asked Bentley to be his mini-best man! 🙂 🙂

Maci’s been retweeting congrats since she made the announcement. One was from Teen Mom 2 star Kailyn Lowry who wrote, “Congrats mama!!!! So happy for you!!!!”

We’re with Kail on that one. Way to go Maci and Taylor!