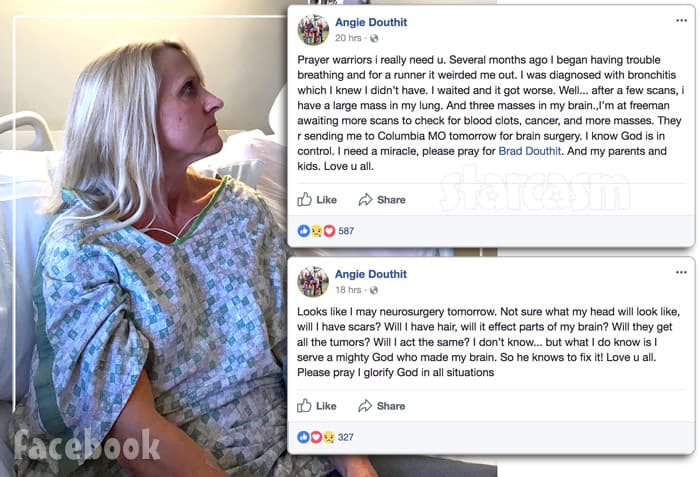 Teen Mom 3 star Mackenzie McKee and her family are asking for prayers after her mother Angie Douthit was diagnosed with multiple brain lesions and a large mass in her lungs yesterday. According to her latest update, Angie is still in the hospital waiting for an MRI and a biopsy to determine in neurosurgery will be necessary.

UPDATE – TMZ is reporting that Angie has been diagnosed with stage 4 brain cancer. The site is “told the next step will be radiation treatments, once doctors have the full picture of Angie’s cancer.”

Here is a full chronological timeline of updates from Angie and Mackenzie over the last 24 hours:

10:09 PM ANGIE: Prayer warriors I really need you. Several months ago I began having trouble breathing and for a runner it weirded me out. I was diagnosed with bronchitis which I knew I didn’t have. I waited and it got worse. Well… after a few scans, I have a large mass in my lung. And three masses in my brain. I’m at Freeman awaiting more scans to check for blood clots, cancer, and more masses. They are sending me to Columbia, MO tomorrow for brain surgery. I know God is in control. I need a miracle, please pray for Brad Douthit. And my parents and kids. Love you all.

12:11 AM MACKENZIE: All prayer warriors. Please pray for my mom. What we thought was bronchitis turned out to be 3 masses on her brain, 1 large one in her lungs and multiple blood clots. We are in shock and devastated. I she has brain surgery tomorrow. I’m sick. I’m so sick and want to wake up from this nightmare.

12:33 AM ANGIE: Looks like I may have neurosurgery tomorrow. Not sure what my head will look like, will I have scars? Will I have hair, will it effect parts of my brain? Will they get all the tumors? Will I act the same? I don’t know… but what I do know is I serve a mighty God who made my brain. So he knows to fix it! Love you all. Please pray I glorify God in all situations

The most amazing woman I know. She taught me everything I know. She is the only reason i am the woman I am today. I love you Mom. I’m devastated, I’m angry, I’m shook.m, I can’t breath. You are everything. Please pray @angiedouthit

Tha k you everyone for the love and support for @angiedouthit . It was a long night full of tears and frustration. So many people love her

11:38 AM ANGIE: Ok prayer warriors, the scripture of the day is 2 Timothy 1:7. “God did not give us the spirit of fear, but of power, and of love, and a SOUND MIND.” Pray that I keep a sound mind no matter what they do to my brain. In Jesus name. #alwaysbekind 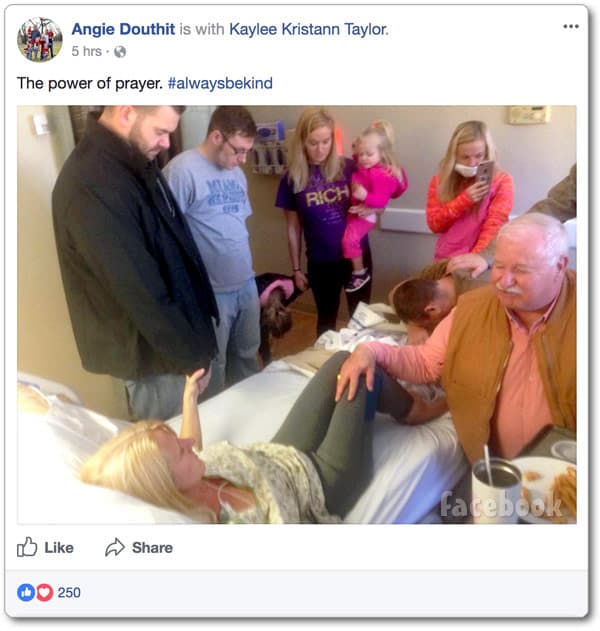 1:18 PM ANGIE: My insurance won’t cover Columbia so… we are waiting to hear from OU. It’s not like I have three brain tumors and a lung mass or anything!!! Lol God is in control!!! #alwaysbekind

#alwaysbekind @angiedouthit wants everyone to spread the word. Hashtag it and tag her.

2:15PM ANGIE: New change of plans… staying here for MRI and biopsy… only I could make things so crazy… #alwaysbekind

2:18PM ANGIE: And I have 5 brain lesions instead of three! Angie’s current health issue comes right on the heals of her husband Brad Douthit having a terrifying medical crisis just before Christmas. Angie shared the story of his “Christmas miracle” with her Facebook followers on Christmas Eve:

I’m going to share my Christmas miracle with you. Brad came home from work in October not feeling well. We decided it was the flu and filled him with meds. He wouldn’t get better so I made him an appt which he cancelled because men do that… so we ended up in the ER that weekend as he was very sick. The dr thought it was his gallbladder but after two ultrasounds and many blood tests it showed no gallbladder probs. But his liver count was extremely high. We soon discovered he had almost every symptom of liver disease. His eyes were yellow and he lost 15 pounds in a week. The other symptoms made him miserable and I was terrified. We took him to a specialist in Tulsa where they did an MRI and more blood work. Still no answers. One day he came home and said God healed me, I looked at him and thought umm ok!?! But after that he slowly got better. This week his blood work showed a perfect liver count. So… God still heals, and I got my Christmas miracle this year! Praise God

More updates after Angie was diagnosed with stage 4 cancer:

ANGIE: Waiting on MRI, bone scan and bronchi scope and biopsy tomorrow. Pray the bone scan is clear. They found several tumors in the brain and the lung tumor is 7 cm, So the biopsy will determine the treatment they do. God is in control and pray I’m always kind and share Christ with the nurses and staff. #alwaysbekind

ANGIE: For Christmas Kaylee Kristann Taylor got me new running shoes, Mackenzie got me a new yoga mat, Whitney . got me new running head bands, and Jordan Douthit got me new Seahawks running pants. So since I can’t run right now, I challenge all of u to run for me tomorrow believing that I till soon get to run and wear my new things! #runforangie #alwaysbekind

Does your body ever run out of tears?

ANGIE: It’s been a crazy day!!! The MRI looks ok, no new news there. The bone scan is clear!!! Praise God! I have 8 tumors in my brain. They will begin radiation next week for two weeks. The mass in my lung is the size of an orange and I have numerous small ones scattered throughout both lungs. We will target those with chemo after the radiation treatments. Being in good health is a huge plus for me and I should heal quickly! God is in control and I’m taking one day at time. I want every day to count, life is too short to waste time. I have a lot of work to do and lots of people to share Christ with, I will fight the good fIght and run the race set before me. I will be strong and do my best to get the job done God has planned for me. I love u all and your kindness and positive comments have amazed me. God amazes me everyday.!!! #alwaysbekind #livelifetothefullest

ANGIE: I’ve learned a lot this week and one thing is to be thankful for really weird things., I came to the hospital because of the lung and breathing problems. They weren’t too bad and if I wasn’t a runner I wouldn’t have even noticed how bad it was., but as soon as they scanned my brain and saw all the tumors they went into freakout mode and couldn’t believe I wasn’t having seizures. They told us if they hadn’t found the tumors, cuz I wasn’t having worse headaches than I’ve ever had and I’ve had a dull earache but no big deal. Anyway they said I could’ve fallen over dead if I hadn’t come in with the lung tumor.,so GOD knew what would get my attention and get me to the dr. He is good all the time and he’s totally in control., Thank God everyday for the weird stuff!!! He may be saving ur life! #alwaysbekind

This woman will change the world. ? pic.twitter.com/XfAdU3EaiA

ANGIE: The biopsy is here. I have non-small cell lung cancer that is also in my brain. I will start radiation Tuesday for two weeks then chemo, life is funny, I’ve always griped at people for smoking then I get lung cancer. However, I know that God has the final authority on what happens to me and his ways r not my ways. God is good. #alwaysbekind Please pray for my family… they’re having a really rough time.

Starting tomorrow I will be training for my first marathon. It’s one of my moms dreams to run the Disney marathon, so I promised her I’d tri

ANGIE: The outpouring of love from Miami and surrounding area is amazing. The love u have shown me and my family is beyond belief. Thank u for all the great food and donations. God is good all the time and you have been used by Him in a mighty way. God bless all of u. Thank thank thank u.

I’ve been a big fan of Angie and Brad ever since Mackenzie’s episode of 16 & Pregnant. They seem like strong and very loving parents and our thoughts are certainly with them, their friends, and their family in this very difficult time.