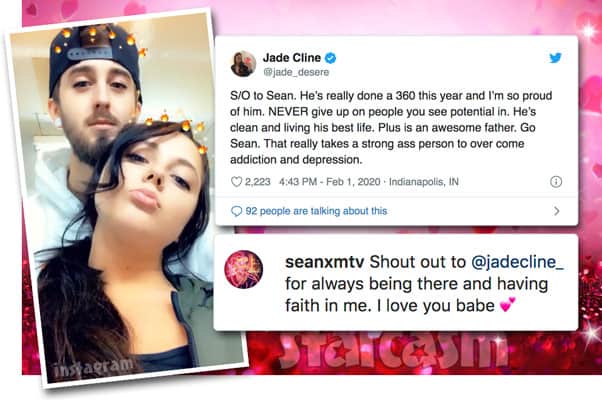 Teen Mom 2 star Jade Cline shared a positive update on her daughter Kloie’s dad Sean Austin on Saturday, revealing on Twitter that “he’s really done a 360” and “he’s clean and living his best life.” Sean responded with his appreciation, and then the two posed for a couple brief video clips together — complete with added fire and kissy emoji.

“S/O to Sean. He’s really done a 360 this year and I’m so proud of him,” Jade tweeted. “NEVER give up on people you see potential in. He’s clean and living his best life. Plus is an awesome father. Go Sean. That really takes a strong ass person to over come addiction and depression.”

Sean shared a screen cap of the tweet on Instagram and captioned it by hitting Jade right back with some admiration. “Shout out to @jadecline_ for always being there and having faith in me. I love you babe ?”

Jade and Sean continued the PDApalooza in the comments of his post. “I love you ?,” Jade wrote. “I love you too babe ❤️?,” Sean replied.

Just like her Teen Mom 2 and Teen Mom: Young and Pregnant scenes on TV, Jade’s positive mood quickly evaporated as she began arguing and cursing angrily with folks over geometry.

Fans were pointing out that 360 degrees is actually a full circle, which would result in pointing the same direction as when you started. “If I did a 180 I’d be going backwards in the wrong direction,” Sean argued.

Sean stood his ground. “I disagree, I mean I am the one who’s lived it.”

The debate continued with another comment. “If you do a 360, you’re in the exact same position you started in. You were going the wrong direction, and then a 180 put you in the right direction.”

Jade handled the geometric criticism with a little less grace and tact, and a lot more capital letters:

YOU PEOPLE AND THIS 180/360 BULLSH*T ARE MAD ANNOYING. EVERYTHING IS UP FOR INTERPRETATION AND ITS JUST A PHRASE. IM OVER HERE PUTTING POSITIVITY IN THE WORLD AND YOU ANNOYING FU**S ARE SO FOCUSED ON THE DUMBEST SH*T.

On Twitter, Jade continued to focus on people focusing on “the dumbest sh*t” as most all of her follow-up tweets were in response to folks pointing out the difference between 360 degrees and 180 degrees.

“WoW YoU GuyS ArE So SmARt,” she replied to one tweet, further supporting her argument by attaching an animated gif of Taylor Swift making a loser sign.

Here are some more of Jade’s insights from The Great 360 Debate:

I’d love to smack you right upside the head

You people are so annoying omfg plz delete your Twitter

Jade also replied to multiple 180-Degree Truthers with an animated gif of Cardi B saying “F**K YOU!”

PHOTO #TeenMom #YoungAndPregnant star Jade Cline posts and deletes a bathroom mirror booty selfie that includes what looks to be a line of white powder, a rolled up dollar bill, and a rigid ID card together on the counter: https://t.co/MwarNdIFal ?‍♀️

Sean would eventually delete his post of the screen capped tweet, seemingly conceding defeat in The Great 360 Debate. He followed that up with a photo of Jade and captioned it with: “Hands down, I’m the Luckiest guy alive ??❤️ @jadecline_ #wifey #badbitch #mine.”

So, are Jade and Sean back together? It would certainly appear so, but that has not been confirmed. Sean did a fan Q&A on his Instagram earlier this month in which he stated that he was not allowed to say anything about his relationship with Jade. Even so, he seemed to hint at a reconciliation:

Q: Consider coming to Oklahoma City and letting me show you around, take you out.

SEAN: I appreciate the gesture, but I and in no way, shape or form single. Two of the most important women in my life have my heart. Kloie & Jade.

Q: Are you and Jade actually together? She makes it sound like you’re not.

SEAN: That is a question that unfortunately neither of us are able to answer. Stay tuned for new episodes of TM2.

Q: You think you and Jade will ever get married? I hope so cuz y’all are a cute lil fam.

SEAN: That’s the goal. Why be with someone if you aren’t both trying to accomplish happiness together.

I am obviously happy that Sean was able to “do a 360” and get his life on track. He and Jade remind me a lot of Gary Shirley and Amber Portwood in that they can’t seem to be together for fifteen minutes without pushing each other’s buttons and going into a rage, but of course I wish them the best as they continue “trying to accomplish happiness together!” And I look forward to seeing how that plays out when Teen Mom 2 returns.

UPDATE – Just after finishing this post, Jade shifted gears on Twitter and focused more on haters in general, as opposed to just those who understand geometry. After several retweets, including Dwyane Wade sharing a Kobe Bryant quote about how having haters is a good problem because people only hate the great ones, Jade offered up her own thoughts.

Jade then reined in her judgment a bit for her next tweet: “Over here judging knowing damn well your life fu**ed up too in its own way. NO ONE is perfect.” 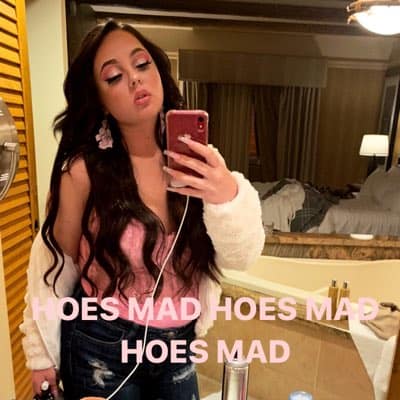