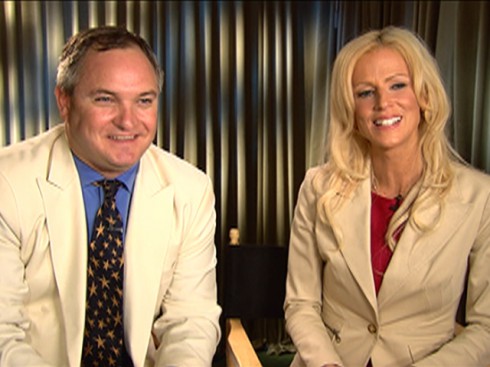 It’s really hard to spend a lot of time keeping up with The Salahi White House Cracher Circus’ press when one of them isn’t faking a kidnapping to run off with a Journey guitarist, but this might be worth noting for posterity.

Tareq Salahi, still reeling from Michaele dumping him for Neal Schon, spoke very openly with The Huffington Post‘s Rob Shuter, and he confirmed what evidence has been telling us all along. Michaele Salahi (probably) lied about a lot of big things.

“Michaele is a well-known and documented liar from ‘The Real Housewives of D.C.’ to our personal life with her other false statements such as being a Redskins cheerleader, Victoria’s Secret model, college graduate, her M.S. … Everything was a lie in our marriage,” Tareq explained. “Michaele abandoned her home, committed adultery and lied to all her friends. Michaele lied about her real home [when] filming the ‘Real Housewives.’ Michaele lied to her husband about attending college. Michaele lied to her own friends, family and cast about an eating disorder. Michaele lied to the public about loving our dog Rio. In short, nearly everything told me was an apparent lie.”

The most notable thing that she appears to have lied about was having M.S. (Multiple Sclerosis.)

September 2010 Michaele told Fox and Friends that she was suffering from M.S., and used that as an explanation for her thin frame, AND an excuse as to why she and Tareq did not stay to eat at the President’s State Dinner. The details of her illness, and the Salahi’s explanation for the whole gatecrashing thing was detailed in a book by Diane Diamond called Cirque Du Salahi. Diamond herself said she could not deny or confirm that Michaele actually suffered from the disease.

March 2011 Michaele was reportedly kicked off of Celebrity Rehab because she did not appear to have an addiction, and tests could not confirm that she had MS. During that time her husband Tareq (who was staying at Michael Lohan’s apartment, you can’t make this stuff up) maintained that his wife had MS, and that she went to the reality rehab to help treat her disease.

Now Tareq has changed his tune, and while some of the accusations on his list seem just bitter (like how she “lied” about loving their dog,) a lot of it jives with fact-checking that’s been done since the Salahis burst onto the scene. But, just to add to all the grains of salt you have to take with everything (this is really messing with our blood pressure!) Tareq made these accusations in response to Michaele’s accusations that she was physically abused this summer (2011).

The Gatecrasher who cried wolf: Michaele Salahi claims to have MS (Multiple Sclerosis)