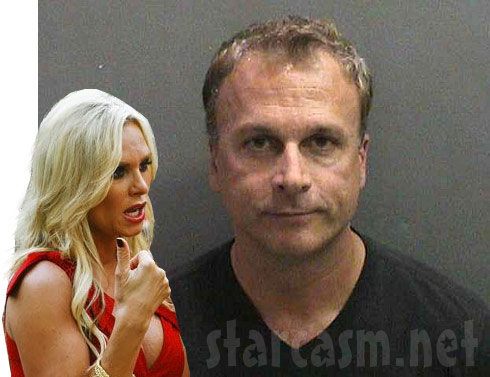 The very public feud between The Real Housewives of Orange County‘s Tamra Judge and her ex-husband Simon Barney is escalating rapidly! The most recent issues between the two became public after Radar Online released court documents from a custody dispute between the two in which Simon lists alleged examples of Tamra Barney being a bad parent to their three children. That was followed by a lengthy rebuttal from Tamra in her most recent Bravo blog post in which Tamra expressed her frustration over Simon making their issues public. Otherwise, Tamra held back on throwing any additional punches Simon’s way. 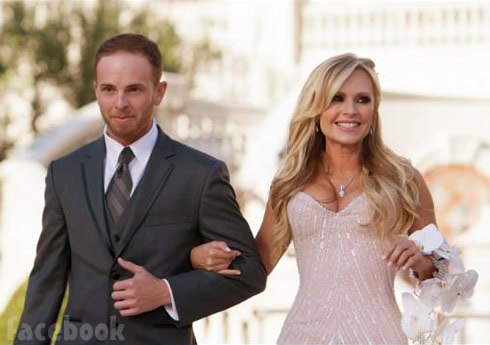 Tamra’s son from a previous marriage, Ryan Vieth (seen with Tamra at her wedding in the photo above), was not so willing to hold back, and he unleashed on Facebook with claims that Simon was once arrested after physically abusing Tamra, and that Simon “verbally abused both of us their entire relationship.” Here is the full entry:

I am not going to sit here in silence any longer. I will NOT allow this piece of shit Simon Barney to do this to my Mother.

I lived with this man growing up, I witnessed first hand what a controlling bastard he is. It’s his way or no way! I was 11 years old the first time Simon beat my Mom up and was arrested. I watched him verbally beat her down many times. He caused so many problems between me and my Mom and now he is doing it with my sister Sidney. He verbally abused both of us their entire relationship. That’s why I moved out at 18. Bottom line, He can’t stand to see my Mom happy with Eddie.

What he is doing to my brother and sisters is wrong. He doesn’t want his kids full time, he just wants to hurt my Mom. He knew exactly what he was doing when he filed those papers. He knew it would become public and destroy our mother. A responsible father that cared about his kids would have brought his “evidence” in front of a judge and not to the press.

I hope the judge throws him in jail where he belongs.”

In addition to Ryan’s allegations, All the Real Housewives (who interview Tamra frequently and, unlike Simon, have a great relationship with her) spoke to a “source close to Tamra” that reveals, “She was hit so hard that she had black eyes and a busted lip.” The source then explains that “Tamra refused to press charges on Simon,” before adding, “Simon was arrested a few years ago for domestic violence as well.”

This whole thing looks like it’s going to get a lot worse before it gets better. 🙁 Stay tuned.