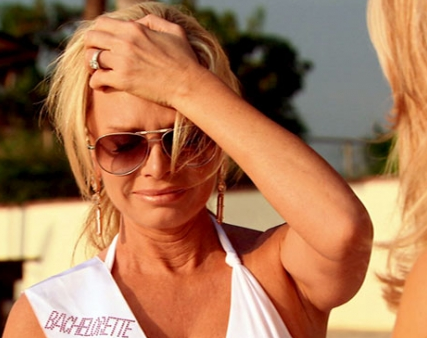 Tamra Barney has been opening up like never before about her painful past on this season of Real Housewives of Orange County. First she talked about her first pregnancy, marriage and divorce, and suicide attempt all before the age of 21.

After her marriage disintegrated, Tamra felt hopeless. “I took a bunch of prescription medication that I found in my mom’s cupboard,” she told the crowd. “Then my mom found me and they took me to the hospital. They admitted me into a mental hospital.”

On Monday night’s episode Tamra talked candidly with Gretchen Rossi about why she freaks out when people get close to her, and why she’s drawn to people like Vicki Gunvalson, who she says don’t ask to many questions, or ever try to get too deep with her. Tamra opened up about growing up in a home where “I love you” was never said, and emotions weren’t ever shown because they were considered to be too painful. “They didn’t know how to love, but they were great parents,” she told Gretchen.

“So I was raised not to cry, not to say I love you. By 12 was my first thought of suicide. At 21 I was hospitalized and tried to commit suicide. So when people get close to me, I feel like they’re gonna leave me. Not one person up there knows that. No one, and I’ve been friends with Vicki for six years.”

UPDATE: Tamra explained more about her battle with depression on her Bravo Blog:

Sharing my story about depression has been one of the hardest things I have talked about on this show and something that I was not necessarily even wanting to share. At the time, I was overly concerned with my son Ryan, who suffers from anxiety and depression, and it brought back so many memories of my own. Seeing yourself through your children’s struggles is a very difficult thing to face.

I am not blaming my parents for the way they raised me or referring to myself as a victim. Both my parents had difficult childhoods. My mom’s mom was hospitalized most of her life for mental illness and my dad’s parents were alcoholics . I love my parents and appreciate everything they did for me.

I’m not sure if my parents never saying “I love you” made me struggle in life or if depression is just hereditary? What I do know is that I struggled with my own inner demons form a young age — something that most people would not even understand. Most of my life I felt alone and I was sad. I used my sarcasm to hide behind the pain and didn’t let people get to close to me.

How much does Amanda Bynes’ psychiatric treatment cost?