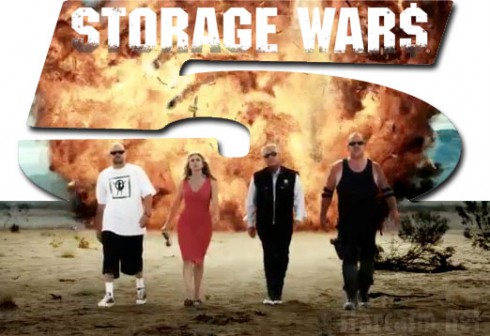 The original crew of storage locker bidders are back at it again as A&E has begun filming Storage Wars Season 5 in and around the Los Angeles area! The future of the California incarnation was unsure after wrapping up a successful fourth season, but it appears fans will soon be seeing their favorite batch of bickering bidders on the small screen again soon. Well, most of them anyway.

We spoke with auctioneer extraordinaire Dan Dotson who tells us that of course he and his wife Laura will be back for the new season. He also reveals that he has seen most of the “players” in action for the cameras including Storage Wars super couple Jarrod Schulz and Brandi Passante, “The Gambler” Darrell Sheets, “new” couple Rene and Casey Nezhoda and Ivy Calvin.

Some of the cast members have been sharing their excitement about filming again online, including Darrell “The Gambler” Sheets who wrote on Facebook, “For all of you that are asking…. Storage Wars Season 5 Update !! We are currently buying and working on filming season 5 ~ I am not sure on when it will begin to air so you’ll have to keep an eye on AETV for that info. Good stuff coming soon, that I can promise.”

And here are tweets from some of the rest of the cast:

@ecuitech The show must go on. Welcome season5 of @AETV #StorageWars coming soon to a TV near you Happy #ThanksGiving #FollowTeamDotson

@BrandonSideBet Thanks Brando, glad to be working with you once again #StorageWars @AETV Season5 Happy Holidays to u & yours see you soon

EXCITING NEWS! We are about to start working on Season 5 of #storagewars 🙂 Stay tuned !!!!!

On a sad note, you probably noticed the list of “players” provided by Dan Dotson has one extremely notable absentee… Barry Weiss. Although Dan not mentioning having seen Barry on the auction scene yet this season isn’t a definite indication the eccentric and charismatic jokester won’t be back, this Twitter interaction between Darrell Sheets and fan may just be:

@kevindnorris1 yes he is gone from this show

Darrell’s tweet seems to back up a report from Radar Online back in June that Barry Weiss had been seen shooting some farewell scenes. 🙁 As sad as the news is that Barry may not be returning to Storage Wars (at least not full time anyway), we can all take great solace in the fact that he is bound to be out there somewhere filling the lives of those around him with grin-inspiring ridiculousness!

UPDATE – We’ve been told that Nabila Haniss is also still a possibility for Season 5. I’m guessing that if she hasn’t been seen at many of the auctions so far that if she does make an appearance in the upcoming season it will be in her usual part-time role.

We will try to update as soon as we get a Storage Wars Season 5 premiere date.