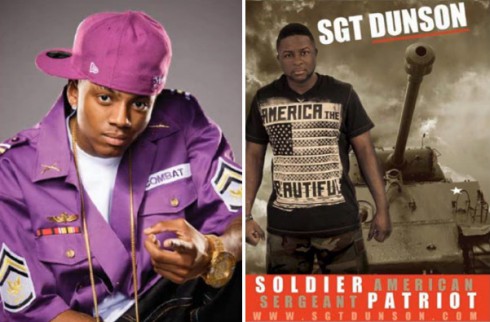 Rapper Soulja Boy, real name DeAndre Cortez Way, has been under serious fire for a lyric from a just leaked track called “Let’s Be Real.” In the controversial song Soulja states the following:

Here’s the video if you haven’t had a chance to check it out yet (serious parental advisory lyrics heads up):

Seemingly as soon as the track hit the internet Soulja Boy started receiving a serious backlash. A petition has already begun requesting that his music be banned from all military bases and it’s gathering steam. In addition, a retired Army sergeant Leo Dunson who is in the rap game and goes by Sgt. Dunson laid down a diss track that’s getting a lot of support and views. Here’s that clip (same adult language warning applies):

Dunson reminds DeAndre that he isn’t “no soldier boy.” All of this has led to a fast response and lengthy mea culpa from Soulja that he posted to Global Grind. Here’s what he has to say about where he was coming from in regards to “Let’s Be Real.”

As an artist, I let my words get the best of me. Sometimes there are things that we feel, things that we want to express, and when we put them on paper and speak them out loud, they can come out wrong. When I expressed my frustration with the US Army, not only did my words come out wrong, I was wrong to even speak them. So, I write this to give my sincerest apology to all members of the United States military services, as well as their families that were offended by my most recent lyrics.

As a young man who grew up in the post-9/11 era, I have watched our country fight two wars that seem like they are never going to end. I have seen thousands and thousands of our brave men and women get killed in battle and often times, I think for what? A lot of people in this country are struggling to make ends meet and I think a lot about what if we had never gone to war. Where would our economy be? Our schools, our after-school and work programs, our streets? I mean, damn, 48 people got shot in New York City just this past weekend … in 3 days … I’m not saying that it is just because of a bad economy, but at a certain point we have to take care of our own people.

In no way would I ever want to offend those who are protecting our freedoms … a lot of homeboys who I grew up with, a lot of people who come from the neighborhoods we live in … In no way do I want to hurt any of our honorable soldiers who put their lives at risk, regardless of how they feel about the two wars we fight in. I am just frustrated that we haven’t been able to bring you all home quick enough and my frustration got the best of me. I am deeply sorry.

So what do you think of the song and Soulja Boy’s response to all the controversy?