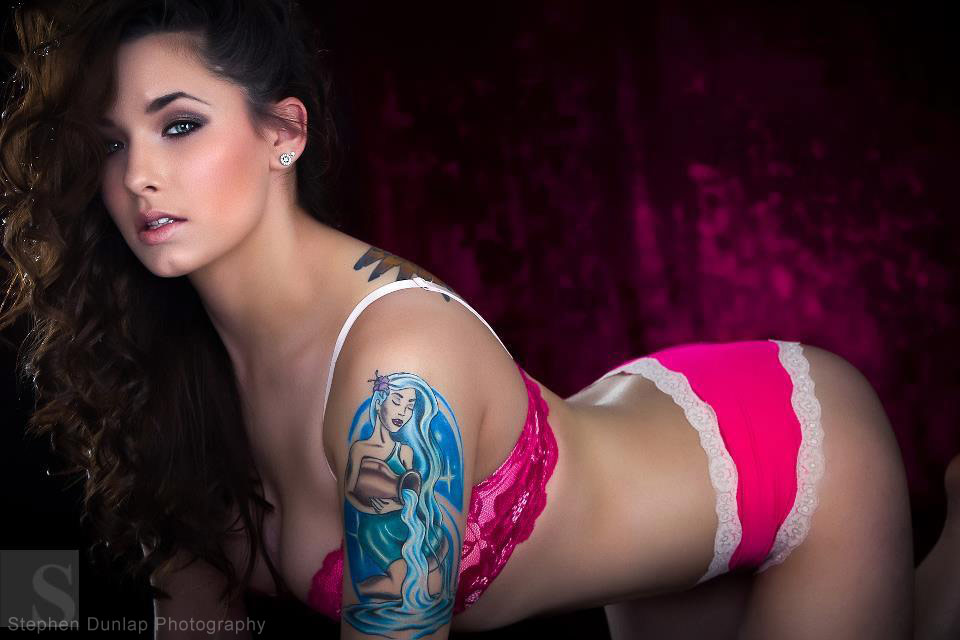 Being on a reality series means exposing yourself to the world, which is something Slednecks star Sierra Medgard is no stranger to. Before blowing up couches and pioneering the art of bikini ice fishing in front of MTV video cameras, this 22-year-old MTV star was doing her part to thaw out her arctic neighbors by gettin’ sledneckid for several professional photographers!

Sierra, who has also modeled under the names Autumn Bergeron and Sierra Autumn, is described by MTV this way:

Sierra is sassy and outspoken and where she goes drama follows. She has been in a tumultuous relationship with longtime love Kelly and the two can’t seem to escape each other. One thing is certain though she can’t help but get involved in everybody’s business.

And speaking of “business,” Sierra has exposed all of hers for the camera at times, but she manages to keep things pretty much SFW with some creative use of her hands and camera angles. Although, there are a few shots I found where the peaks of her Mt. McKinleys are barely covered, if you catch my (snow) drift. (Example 1, 2, 3)

Just like her Slednecks co-star, Tosca Yeager, Sierra has some rather prominent tattoos, including large, intricate and colorful designs on her right arm, hip, and back. I tried to find the best photos of each and put them together for you here: 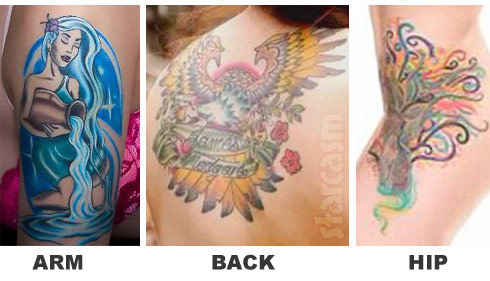 Unfortunately, unlike Tosca, Sierra has not given any insight into what her tattoos symbolize and/or mean. That being said, the tattoo on her back has the name “James Medgard,” which is her father’s name. When researching her modeling background I ran across an article about her dad, who died in a motorcycle accident on September 15, 1999. Sierra would have only been 7 or so at the time.

Her arm tattoo is clearly Aquarius, so that may be just a zodiac thing.

You would think being as young as she is (yes, MTV viewers, 22 is young!) that Sierra wouldn’t have much modeling experience, but judging from this instagram post she’s been doing it for a decade!

#TBT Picture was taken durning my first photoshoot when I was about 12. Due to growing up in foster care they asked me to do a shoot to promote adoption! #young#pink#dress#thisiswhatiwasmenttodo#shorthair#stillhadboobs

OK, I’ll quit talking now and get on to more modeling photos — including a samurai pic! Sierramurai?

You can see more of Sierra in new episodes of Slednecks airing every Thursday night at 10/9c on MTV. You can also keep up with her off screen with these social media links:

I’m going to finish this post up with the most Sierratastic photo ever. It may not technically qualify as a modeling photo, but whenever there is an American flag bikini, a gun and a large trout involved, there is no need to bicker over details! 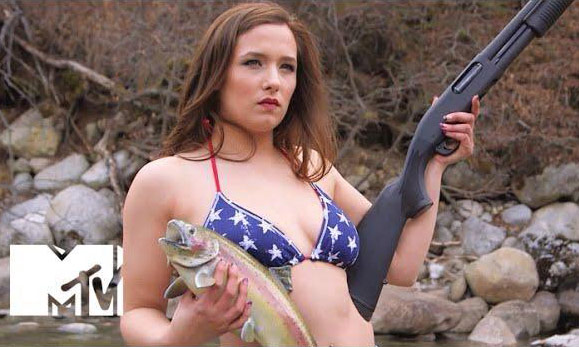 Welcome to the United States of Sierrakuh! F*** yeah! (My guess is that Sierra has already been contacted by the GOP for a potential future in politics.)