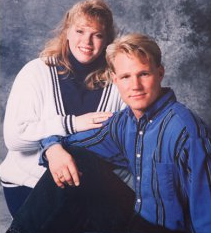 The Brown family from TLC’s Sister Wives recently published a very honest and open book called Becoming Sister Wives about the complicated history of their lives in a plural marriage. There’s a lot of great stuff in there, but one thing that’s making a lot of headlines is Janelle’s revaluation that in the eighth year of her marriage she moved away from the family for several years.

When talking about Janelle’s early relationship with Meri and Kody, they all admitted that huge mistakes were made that put caused roadblocks to family harmony. Janelle was once married to Meri’s brother Andy, so Meri and Janelle were familiar with each other but had never forged a close friendship. Janelle DID find deep friendship with Kody, who had once been her brother-in-law and was also her step-brother, helping him find work, and connecting with him on a cerebral level. Janelle admits in the book that she and Kody were not in love when they courted and married, and Meri admits that Janelle and Kody’s less intense relationship made her feel more safe than when he invited another woman into the marriage.

Looking back, Meri has regrets about how they handled their initial cohabitation. “I never took the time to think about how I should upon up my space — both physical and emotional — to accommodate a new wife . . . The biggest mistake we made when we married Janelle was us all moving into a house together and not giving Janelle and me the space we needed to develop and nurture our own relationships with Kody. Having us all in the same house brought Janelle face-to-face on a daily basis with the romantic relationship Kody and I had.”

Meri and Janelle had terrible fights, and Meri admitted to being “harsh” and “aggressive.” She also felt “devastated” when Janelle got pregnant before her, even though “Deep down, I had expected it.”

Janelle describes feeling completely unwelcome in Kody and Meri’s house in the early days of the marriage. “Meri and I went from cordial to frosty overnight. We sniped at each other over the smallest things. When she was younger, Meri had quite an overbearing personality. It was clear I was unable to do anything right–or rather, in a way that suited Meri. I folded Kody’s clothes incorrectly. I bought the wrong dish soap and put away the dishes in the wrong places.”

Christine’s introduction into the marriage helped ease the tension between Meri and Janelle, but things really came to a head after Janelle gave birth to her fifth child with Kody. She found herself sinking into a deep postpartum depression:

I felt so overwhelmed by having had so many children in quick succession, and felt seriously depressed at our lack of financial means. I knew I was miserable, but had no idea how to fix the situation.

She had a really bad fight with Meri, and saw no way out, so took all her kids to go stay with her mother. After a while being away, Janelle actually bought herself a new car and a new house so she could begin her life away from the rest of the family without actually exiting the marriage. (With her salary, she had this option, but only if she stopped contributing money to the family, but she had no intention of leaving the marriage.) After she moved out, Janelle got her degree in accounting and after two years Kody proposed that they all move to Utah where he had found a new job and a huge house built for a polygamous family (the one featured on the first and second season of Sister Wives.) Janelle actually stayed behind in her own house for another year before deciding to move in with the entire family (until the move to Utah, Christine also had her separate house, so this one house per wife thing they’re currently doing in Las Vegas isn’t really so novel to the family.)

All the wives openly talk about how their marriage has had ups and downs, and all the wives have struggled at some point, but they still find plenty of positives to make the negatives worth it. They have four other people in their marriage, so when they’re struggling with one or more, they still have someone else to lean on. Right now Christine is struggling hard with her relationship with Kody, and it’s being documented on television. They had all gotten used to being in the same marriage for so long, when Robyn was introduced, it shook thinks up again in a major way.