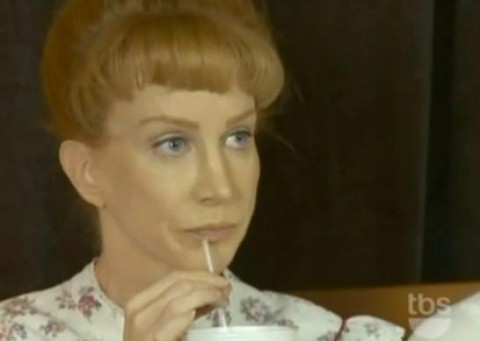 D-list queen Kathy Griffin appeared on Lopez Tonight Monday and was her usual hilarious self.  Her sit down with George was really good but the highlight of the night was a video she put together mocking TLC’s polygamy themed reality show Sister Wives.

During the interview Griffin riffs on the network TLC which she says, “…hasn’t been the learning channel in some time.”  She singles out Sister Wives and then tells Lopez that she’s working on her own show called Brother Husbands.

That’s some funny stuff right there Miss Kathy but I think you could do better than George for a 4th husband.  As a suggestion how about that guy who’s running for the Mayor of Wasilla, Alaska.  That’s right, you know you want you some po-Levi-gamy action with Mr. Johnston!  He’s already proven he’s a successful breeder and I just bet he would look fine in one of them modesty tunics.

There is no word from TLC if they will be picking up Brother Husbands but they have confirmed a second season of plural marriage family fun with Kody Brown, his 4 better fifths and 16 children.  Somebody get me some purple drank.