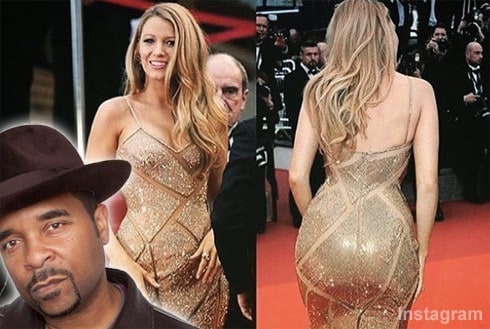 Sir Mix-a-Lot has come to the defense of Blake Lively after she stirred up a hornets nest by referring to her own backside as an “Oakland booty.” This terminology was made famous by Mix-a-Lot’s 90’s all-things-tushy masterpiece, “Baby Got Back.”

A couple of days ago, Lively posted a side-by-side image that showed her front and back in a form-fitting dress on the red carpet. She captioned the Instagram post, “L.A. face with an Oakland booty.”

Lively got some rather lively feedback about the share, with a number of people accusing her of being racially insensitive by dropping the old-school rap reference.

Another day, another rich white woman using WOC's bodies as a punchline and commodity. As if Blake Lively wasn't the worst already.

@blakelively you obviously use social media so maybe now you can tell us why you got married on a slave plantation pic.twitter.com/hvUZUtdW5Z

This badonakdiscourse rolled on, leading the Hollywood Reporter to seek out the original source, Mr. Mix himself, to get his thoughts. Sir was pretty eloquent in explaining his intentions behind the song and his belief that Blake meant no harm:

What I meant by “L.A.” was Hollywood. In other words, makeup or whatever it took to make that face look good, they do it in L.A. But, as much as you can throw makeup on something, you can’t make up the butt. That’s what L.A. face and Oakland booty meant. You can put makeup on that face and make it look beautiful, but a butt is a butt, a body is a body.

Fast-forward to Blake Lively. For her to look at her butt and that little waist and to say “L.A. face with an Oakland booty,” doesn’t that mean that the norm has changed, that the beautiful people have accepted our idea of beautiful? That’s the way I took it.

Sir Mix-a-Lot added, “But no one in the world is gonna tell me that a woman that wears that dress is thinking that she’s fat. No, I’m sorry, it just doesn’t happen. It sounds like to me like she was giving the line props.”

Did Ryan Reynolds and Blake Lively secretly get married?