At around 9:30 p.m Thursday night during a Broadway performance of Cabaret, actor Shia LaBeouf was arrested for creating an aggressive disturbance. The acting out did not stop once he got in handcuffs, he was put in a face mask after he threatened officers and wouldn’t stop spitting.

According to Page Six, LaBeouf was slapping other theater goers on the butt and the back of the head, and smoking during the play’s performance. When cops approached him, he tried to get away, but fell, and they were able to apprehend him. A witness on the street posted on Instagram the above image of Shia with police tonight.

Broadway actor Benj Pasek tweeted about seeing Shia LaBeouf on the street crying during the incident.

Just saw Shia LaBeouf in handcuffs in tears surrounded by 6 police officers outside of CABARET the musical. Oh New York, u is a crazy bitch

There is no mug shot from this incident yet, but here’s a mug of Shia from 2007 when he was arrested for criminal trespassing when he refused to leave a Walgreens: 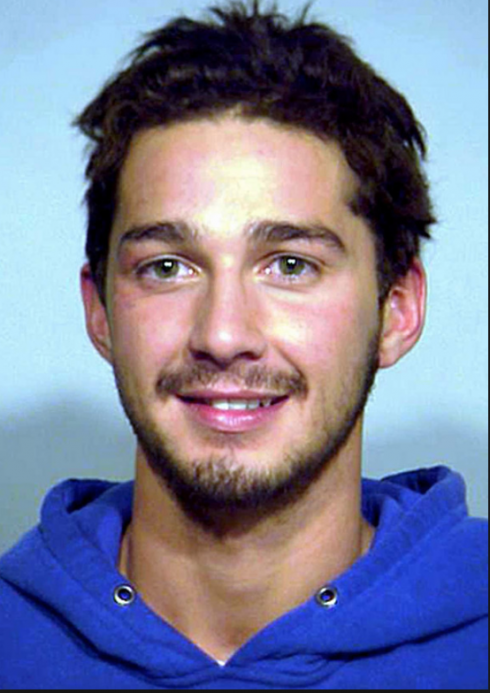 “I have millions and millions of dollars and attorneys and I’m going to ruin your career.” LaBeouf told the police officer who was fingerprinting him, before calling him a “f@g.” His charges include criminal trespass, harassment and disorderly conduct.

Shia LaBeouf has been known lately for some “artsy” antics designed to get attention, but this could definitely be argued as taking it too far. This February he got some headlines for walking a red carpet in Berlin with a paper bag on his head that said “I’m Not Famous Anymore.” Later it was revealed that he had a coinciding art installation in L.A. James Franco, who is no stranger to media shenanigans, analyzed Shia’s behavior with a warning of caution via a NY Times piece. Franco must be out there somewhere shaking his head.

Shia LaBeouf says he was raped during his February art installation