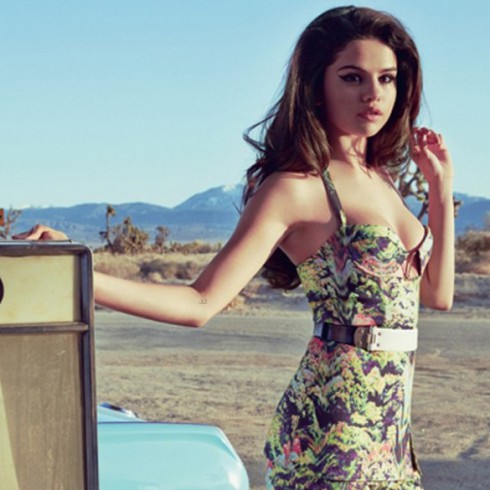 While her ex Justin is sipping beers in South Africa, Selena Gomez is letting the boys know she’s 100% available. There’s been some whispers that the two kids were trying to work things out, but Selena says she’s up for ice cream dates any time.

The pop star, who covers the latest issue of InStyle, gave a Friday morning interview with radio station KISS 108. When the DJ asked:
“So sometimes you may see a boy walking down the street and he says, ‘Let’s grab an ice cream,’ you’re available,” Selena replied “Yep!”

“You’re completely available in every way,” he asked, and Selena again said “Yep.”

Here’s the interview where they also discuss he fact that Selena was named after Selena, a latin-american pop star who was tragically murdered in 1995.

Selena told InStyle that she wrote a song about Justin called “Love Will Remember” on her new albume Stars Dance. “That’s the most personal track on the record, for sure. I think it’s a sweet way of releasing it. It’s not an aggressive approach to what people are probably expecting. I’m sure he’ll love it, too.”

Selena isn’t the only star to reveal their single status via a radio interview, Chris Brown recently shared with the world that he wasn’t interested in “wife-ing” Rihanna.

Scott Disick rumors: He’s fallen off the wagon and out of favor with Kourtney Kardashian